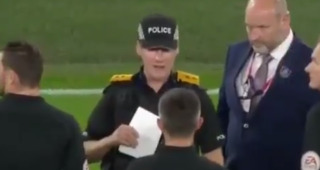 With all four goals in the pair’s Carabao Cup tie coming in the 80th minute or later last night, there was plenty of drama to get both sets of supporters riled up.

Former Leeds hitman Chris Wood scored an 89th-minute equaliser against his former side, before two more goals were shared in injury time to take the game into extra time. That was scoreless, however, so penalties awaited the two teams.

With tempers high and fans flustered, the Lancs Police force decided it would be wisest to ignore a coin toss and hold the shoot-out at the home end of the ground, in the hope of avoiding potential trouble with Leeds' travelling horde.

Leeds boss Thomas Christiansen wasn't particularly amused, but it didn't matter much in the end: Leeds went on to win the shoot-out 5-3 and book their place in the fourth round.