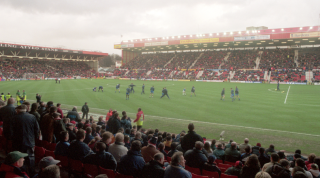 Formative football experiences are curious. Contrary to myth, they seem to pass without the football mattering too much. You don’t fall in love with players, do you? Maybe you do later, but not straight away. No, in the beginning it’s sensory. The green of the pitch through the bodies. The smell of the cut grass. The feeling of being one among many.

In Fever Pitch, among his many other recollections, Nick Hornby remembered his father taking him to Highbury for his first game, to watch an Arsenal team win by a single penalty-rebound to nil. A few weeks later, his dad would take him down Tottenham High Street, to watch Bill Nicholson’s Spurs at White Hart Lane.

By any conceivable measure, Tottenham were the better side of that era – the more glamourous team, certainly – and yet it was Arsenal who sunk their jaws into Hornby. Loyalty may not always be up for grabs in the same way, but it’s definitely the quick rush of that first experience that matters.

Twenty-eight years ago this month, I went to my first professional game, Bristol City against Cambridge United at Ashton Gate and the memories from that day are both sharply vivid and - it turns out - maddeningly vague. City were a Division Two side, the Championship at the time, and would lose 2-1 that day. Their squad was a typical blend of yesterday and tomorrow, full of the kind of players who could found on ITV on a Sunday afternoon.

A 33 year-old Russell Osman was still clinging to his last playing days, while Terry Connor and Leroy Rosenior were also approaching the shadow of their retirements. At the other end of their careers, a tricky little winger named Junior Bent was expected to go higher in the game and, weeks before that Cambridge match, City had taken a loan punt on a  21-year-old forward from Arsenal called Andy Cole.

It would be a year of turmoil. A strong start gave way to a long, barren winter during which the club would cycle through three different managers. It was a slump serious enough to end Jimmy Lumsden’s only job in coaching in February, with Osman serving as an interim player-manager for a month, before Denis Smith would arrive having been dismissed by Sunderland – a Sunderland side, incidentally, who would actually finish the 1991-1992 seaon at Wembley, losing the FA Cup Final to Liverpool and that wonderful goal scored by Michael Thomas.

But I don’t remember any of that. It’s strange. As you get older, context is everything. Games become more about their consequences than their drama and, likewise, seasons are framed by what they lead to the following year. It's not the same kind of immediacy. But when you’re young - conversely - the colourful assault of attending a game for the first time is just too much; everything else just blurs on the periphery.

There are always the cliches which leave an indelible impression. Like the onions frying and the weight of the turnstile. Or the smell of the polyester in the club shop and all the new swearing you hear during the game. But there are the specifics, too. I remember an elderly man offering us mints every time City scored (one mint, then), I can recall the linesman on the near side being mocked repeatedly for wearing his shorts too high and then, inevitably, bodies sprouting up in front of me when City took a first-half lead.

Until very recently, I thought I had perfect recall of Cambridge’s winning goal, too. There’s a sharp memory in my mind of one of their amber shirts running beyond the home defence, every fan around me screaming for offside, and then the ball richocheting under ‘keeper Keith Welch and into the net.

It happened. It definitely, definitely happened, because the fury was visceral and the language used to express that anger made my eyes spin.

But not so. It’s grainy and it will make younger fans recoil in horror, but I found footage of that game on YouTube. Nowhere does that goal appear. I know the memory comes from that game, because I begged to be allowed to go behind the goal every other occasion I went to Ashton Gate, but it just doesn’t exist.

It’s actually like finding out that the game didn’t happen at all.

But it makes an important point and one worth this dislodged brick in my childhood. The mechanics don’t matter. It’s not really the team that drags you in at first, it’s everything else. In fact, the actual football is the least important part of the day. It's the thing you remember last, that you carry with you for the least time and which, if you inspect your own memories properly, probably isn't quite as you recall.