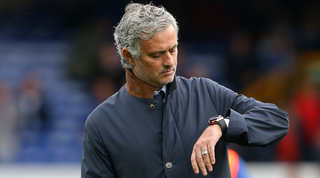 Time-wasting has been covered – complained about – in this corner of the internet before. Then, it was a reaction to the weekend’s events and the many, many minutes lost to the combination of canny players and naïve officials.

Essentially, it was little more than an artless moan.

Now, with days, weeks and potentially months on our hands, it's time for solutions. Truthfully, the only proper response to time-wasting is some kind of macro revolution – the incorporation of a stop-start clock, for instance, or a new type of power for referees. True enough. But there are ways within the existing regulations to attack the problem. Marginalising the effect of time-wasting tactics could be as simple on being more strict in certain areas, or just applying subtle tweaks to existing rules.

Here are some starting points:

Police the taking of goal-kicks

One option might be to mandate the return of the ball by a ball boy, eliminating the opportunity for goalkeepers to leave the pitch and dawdle by the advertising hoardings. Once a goal kick is awarded, he would have to remain in his six-yard box and wait for the ball to be returned to him. As soon as he’s in possession, the goal kick must be spotted-up and taken within 15 seconds, otherwise it’s an indirect free-kick to the opposition on the penalty spot.

It's rather like the shot-clock idea which has appeared in the National Rugby League over the last two seasons - and which has proven successful at speeding the game up. Once a scrum or line drop-out has been called, the side responsible for the restart has to complete it within a certain number of seconds, or a penalty is awarded against them.

The point is: this can no longer be left to the discretion of individual referees and has to be policed in a proper, legislative way which is consistent.

While we’re at it, let’s do away with the convention of only yellow-carding for timewasting after the 75th minute. And – a reminder to the PGMOL – a goalkeeper is not immune from being cautioned again once he’s been carded, and it is permissable to send him off if he keeps offending.

Yes, the first referee to actually red card a goalkeeper for time-wasting is going to face a hailstorm of outrage, but he'll also be a little bit of a hero.

If ever there was a job for Mike Dean...

Younger fans might not even know that this exists. It's Law 12 for anyone counting and it prohibits a goalkeeper for holding the ball for more than six seconds.

For over a half a century, there were very few restrictions on what 'keepers could do when in possession. They could move about freely, just so long as they bounced the ball or threw it up to themselves as they did so.

That changed in the 1960s, when the four-step rule was introduced. It was as it sounded: it allowed for four steps in any direction, but after which the ball had to be delivered back in play.

Unfortunately, it was manipulated. Goalkeepers would take three of their steps, put the ball down, and force an opposition player to run half the length of the pitch before picking it up again, all the while having one more ‘step’ in the bank. Eventually that loophole was closed, with goalkeepers prevented from picking the ball up again without another player having touched it first, but that modification was necessary at all describes just how much cheating 'keepers did over the years.

Real change would come in 1992 with the backpass law, enacted as a response to the negative tone which had blighted Italia 90. Six years later, the six-second rule arrived and then...  it was gone. It vanishd, never to be spoken of again. Which is a great shame, because the broader issue facing the sport isn’t just time-wasting specifically, but time lost from games as a whole.

Given that the average in-play time in the Premier League is around 55 minutes and that the ball being held by a goalkeeper doesn’t count as time lost, clearly it’s an area ripe for inspection. All of these innovations were designed to quicken the speed of play and, arguably, this was the most powerful tool of them all.

And if it made goalkeepers think twice about flopping to the floor after making a simple catch and then spending 20 seconds being patted on the head by teammates, then it was all the better for that.

To an extent that’s already the case, but it only really applies to the most egregious offences. To earn a yellow card, a player actually has to block an attempted free-kick, kick the stationary ball away or otherwise cause such an obvious obstruction that the referee really has no choice.

But it's time to get draconian. Once a free-kick is given, the defending side should be obliged to have no more contact with the ball at all. None. No more picking it up, running back towards goal and then putting the ball down. No more passing or kicking it vaguely towards the opposition, but in such a way that it actually buys time. Definitely no more loopy throws up in the air, either,

No more substitutes in stoppage-time

This isn't original, it's actually been around for some time and has regularly featured in IFAB discussions. Why it's never been introduced (or even trialled) is hard to understand, though.

Injuries would be excepted, even if – obviously – that privilege would sometimes be abused. It shouldn’t necessarily be that easy to do so, because if a player actually has to leave the field, then that should generate a significant chunk of compensatory time.

That partly relates to a different issue, because Part One of this entire conversation involves referees being far more vigilant than they currently are, but what we’re actually targeting here is the intentional disruption of the game from the technical area.

It’s just so contrary to the spirit of the game. It’s also so blatant that the practice even has its own cliché, with commentators recognising it as a ‘way of wasting a few precious seconds’.

Yes, those seconds are precious. Let’s treat them as such.

Some kind of tactical re-organisation will occasionally be necessary – because of a late goal or flow of pressure - but if a coach isn’t able to achieve what he wants using the players already on the pitch, then that actually describes his own lack of mental agility.

No more; this is a privilege which has been abused and, increasingly, just a means of denying a game the final rush of continuity it deserves.