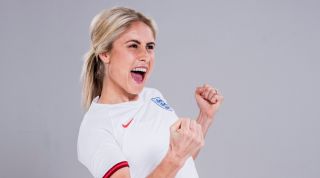 England international Steph Houghton has called for more women’s football matches to be shown on television in an effort to increase interest in the game, in an exclusive interview with FourFourTwo.

On Sunday evening, England opened their Women’s World Cup campaign with a 2-1 win over Scotland – but it was the viewing figures back home that were the real story.

At its peak, 6.1 million people in the UK watched the game on BBC One – the biggest British audience for any women’s football game ever. All matches at the World Cup in France are being shown on the BBC, albeit some games are only available via red button services or online.

And the Lionesses’ skipper Houghton believes that the women’s game should be shown more regularly to help build interest.

Speaking in the July issue of FourFourTwo, on sale now, the Manchester City defender said the televised games were the most obvious area of neglect for women’s football

“I think it needs to be televised a lot more than it currently is,” she said. “If we could have one match on a main channel every single week, that would increase the number of young girls getting interested in football, be that as fans of clubs or even as players.”

Houghton hopes that interest that grows out of this World Cup can prove more sustainable than the 2015 in tournament, where England came third and players enjoyed a short period in the spotlight on their return to the UK.

“It was a bit of a whirlwind when we got back home,” Houghton explained. “We landed at Heathrow and there were loads of reporters waiting for us. We’d just got off a 10-hour flight so everyone was looking rough.

“Then the next minute we’re at Downing Street, we’re meeting Prince William, we’re at Wimbledon. For two or three weeks it was surreal. We were all absolutely knackered, but it was an amazing time.”

With England’s top flight for women’s football now full professional for the first time, there is believed to be greater scope for building on any success the Lionesses have this summer.

Read the full interview with Steph Houghton and the England Women’s team in the July 2019 issue of FourFourTwo, which you can order online here. This issue also includes an exclusive interview with Diego Maradona, a history of madness at the Copa America, and an in-depth profile of ex-Barcelona and Spain hero, Carles Puyol.