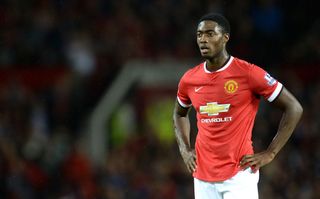 Born in Manchester, defender Tyler Blackett has been with Manchester United since the age of eight, joining his local club in 2002.

Blackett has represented England from Under-16 to Under-19 level, as well as spending time out on loan at Championship clubs Blackpool and Birmingham, before impressing on United’s pre-season tour of the United States.

Traditionally a left-back, new Manchester United manager Louis van Gaal has deployed him as one of three centre-backs in his new 3-4-1-2 formation, as he looks to change United’s fortunes after last season's hapless performances under David Moyes which saw the 2012/13 champions finish a dire 7th.

Blackett was one of the standout players of United’s pre-season tour of America. His impressive displays in the victories over Roma, Inter Milan, Real Madrid and Liverpool in the International Champions Cup demonstrate just how much Blackett has developed in such a short space of time.

he former England youth international outshone many of his team-mates, with Van Gaal admitting that Blackett has forced his way into his plans for the upcoming season. With a string of injuries in United's squad, Blackett was handed his debut in the 2-1 opening day defeat to Swansea.

It seems likely that Blackett will be involved with the first team more often this season, but to what extent he is will depend on whether Van Gaal keeps faith in him after signing Marcos Rojo, who plays in the same position. The 20-year-old is a perfect fit in Van Gaal’s new system and his versatility is ideal as he can operate as a left-back in a four-man defence, or as a centre-back in the 3-4-1-2 Van Gaal seems intent on employing.

Blackett is also a much cheaper and rewarding alternative to Holland international Bruno Martins Indi, who played in the same role under Van Gaal during the 2014 World Cup in Brazil, operating at centre-back and left-back throughout the tournament. United were heavily linked with a move for the ex-Feyenoord defender but no formal bid was made and the 22 year old secured a £6 million move to Porto.

Blackett has a tall, powerful physique. He’s strong, athletic and has lightening pace which makes him difficult to dispossess. The defender looks comfortable when in possession of the ball, and his distribution is also impressive, regularly producing pinpoint passes which enable the team to get out of trouble and launch a counter-attack. His work-rate is second to none and he seemed unfazed even when playing up against the likes of Cristiano Ronaldo, Gareth Bale and Raheem Sterling during the pre-season tour.

Despite being strong and pacey, Blackett needs to develop his ability to take on opposition players, something which Blackpool and Birmingham fans will know all too well from his loan spells at their respective clubs. All too often when charging down the left hand side Blackett gets the ball caught up underneath his feet, making him easy to tackle and leaving the team susceptible to a counter-attack.

However it must be noted, the effect of this would be limited in the 3-4-1-2 formation, as there would be two other centre-backs to cover his ventures forward. Also, Blackett often gives away needless fouls, something which he needs to eradicate from his game to ensure he’s not putting his team under consistent pressure having to defend set-pieces.

Blackett’s impressive performances during pre-season earned him high praise from Van Gaal: “He can play at this level for sure, but can he play match after match? I can’t answer this at the moment.” Also when asked about impending defensive reinforcements Van Gaal stated that while United were looking for replacements for Rio Ferdinand and Nemanja Vidic: “We have to replace them but I also like Michael Keane and Blackett.”

Blackett is technically eligible to play for England, Jamaica, Barbados through family connections. However it is unlikely we will see any Adnan Januzaj-esque debacles over international allegiances, with Blackett having already represented England at youth level, and stating his intentions to represent England as a fully fledged international in future.

Hopefully for the 20-year-old, a good run in the first team at Old Trafford. However this largely depends on whether Van Gaal sticks with Blackett having secured one of his defensive targets in the transfer window in Rojo, as well as the form of Phil Jones, Chris Smalling and Jonny Evans.