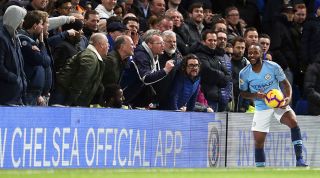 After nearly three hours of hard work, the Football Association succeeded in eradicating racism in football before breaking for lunch, the organisation has reported while reflecting on a highly satisfactory day.

Manchester City’s Raheem Sterling posted a statement on Instagram saying newspapers were fuelling racism by their portrayal of young black players, and the forward was allegedly racially abused during City’s loss to Chelsea, forcing the FA to take decisive action.

“First thing on Monday morning an emergency meeting was convened to discuss racism in football,” an FA insider told FourFourTwo.

“OK, well maybe not first thing, but we got going at around 10.30/11am after everyone had had a coffee and some pastries.

“Then there was some small talk, but we were fully in the flow by 11.30 until someone else said they had booked Conference Room C – that took a good 15 minutes to sort out. But after that we were in full flow.

“We’d all been concerned that what we were dealing with was a deep-rooted, insidious problem with myriad complex societal causes, but we whipped up one hell of a slideshow.

“We found some amazing stock pictures and then added some buzzwords like ‘inclusivity’, then we increased the font size so we only needed to put five words or so to fill a page.

“By midday we were all in full agreement that we had cracked [racism].”

While retiring for lunch, FA executives admitted that they were experiencing a vague sense of deja-vu, but the uncomfortable feeling was dismissed as ‘meat sweats’ after their nine-course feast.

“I was really sure that we kicked racism out of football a few years back,” our source continued.

“I remember us doing a lot of mutual back-patting and producing some world-class leaflets about just how hard we’d kicked racism and how far from football it had gone.

“Most of us around the table remembered those meetings because they’d taken nearly three hours and we’d had this top-drawer dim sum lunch afterwards.

“Maybe racism hit the corner flag and bounced back into play?”

Delighted to find the afternoon unexpectedly free, the FA resolved to settle sexism and homophobia in the remaining hours of the day before becoming distracted by a series of hilarious viral videos.

“There’s this squirrel and this guy is trying to feed it chips, but then out of nowhere a grizzly bear arrives and… well, I don’t want to ruin it for you, but we watched it 100 times,” the FA insider recalled brightly.

“After that we forgot what it was exactly we were planning to do that afternoon, but still great to have got rid of racism anyway. Big day.”