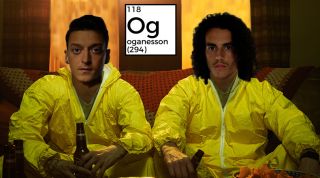 Arsenal officials have pledged to open an immediate enquiry after shock tabloid reports that players were openly inhaling gases outside of a laboratory fume cupboard setting.

A host of players, including Mesut Ozil and Alexandre Lacazette, were pictured consuming a substance from a balloon that was believed to be nitrous oxide but which sources now indicate could be an exotic gas such as Oganesson-294, which is de rigeur among elite footballers.

While the club has moved to play down reports of rampant gas inhalation, there are rumours that players are openly inhaling helium during training, causing sessions to be derailed by wheezing fits and hilarious high-pitched voices.

“[The Noble gases are] a serious problem and it’s deeply rooted in the culture at Arsenal FC,” an insider told FourFourTwo.

“Players are openly wolfing down balloons filled with helium as if it’s nothing.

“The coaching staff will routinely have to abandon a session because a player has knocked himself out or impersonated a cartoon mouse so expertly that nobody can focus on anything else.”

Most worryingly, insiders report that the on-trend gas at present is Oganesson-294 – a synthetic substance that is renowned for its instability and of which only a few atoms have ever been produced at the cost of around $6 billion.

“When he’s not at training, I know for a fact that Alexandre Lacazette spends his time colliding californium-249 atoms and calcium-48 ions,” our source continued.

“And when he’s not doing that he’s writing a peer-reviewed paper of his findings, or attempting to create a Joint Working Party of international scientific bodies such as IUPAC and IUPAP to continue his work.

“I refuse to believe this isn’t taking some toll on his performances.”

Arsenal have issued a statement insisting that the problem will be reviewed and offenders will be dealt with immediately.

“There’s only one table that we’re looking at right now and that’s the Periodic Table,” a spokesman told FourFourTwo.

“We will operate a zero tolerance policy and if we find even an ounce of Nihonium or a thimble-full of Tennessine then we will take disciplinary action, as soon as we’ve stabilised the element and brought in a Hazmat team to ascertain its atomic half life.

“We would also like to make clear that none of this detracts from our commitment to Xenon as the official inert gas of Arsenal Football Club.”