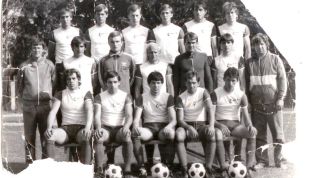 On Saturday, 26th April, 1986, Stroitel Pripyat prepared to take on FC Borodyanka in a cup semi-final in northern Ukraine; the first game in their new stadium.

The game did not go ahead.

The stadium would never be used.

Adapted from an article in the latest issue of FourFourTwo magazine, in this podcast Grant Fulton tells the story of the footballers who had to flee the fallout of the Chernobyl nuclear disaster, those who bravely helped in the aftermath – and the football club that disappeared with a city.

Read Paul Brown’s full story on FC Stroitel Pripyat by buying the September issue of FourFourTwo now and getting it delivered straight to your door.

Other voices were provided by Lyle Fulton, Ruslan Hay and Pete Mauder

Get more stories like this every month in FourFourTwo magazine. Subscribe now and get five issues for £5.

The executive producer is James Brown, and FourFourTwo podcasts are overseen by Steve Morgan and Conor Pope