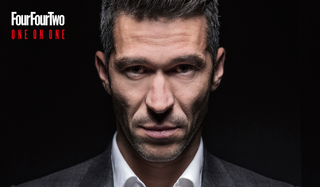 The Reds famously fought back from 3-0 down at half-time in Istanbul before beating Milan on penalties, securing a fifth European Cup for the Merseysiders.

Dietmar Hamann, Djibril Cisse and Vladimir Smicer all converted from 12 yards as Rafael Benitez’s men overcame the Rossoneri 3-2 on spot-kicks – and Garcia has revealed he wanted to be among the Reds’ first five takers, but was held back.

Speaking exclusively in the October 2017 issue of FourFourTwo magazine, the Spaniard says: “They wouldn’t let me take a penalty! I wanted to take one but Rafa had other ideas. I think I would have been the sixth had it gone to sudden death.”

It’s probably a good job Garcia was bumped down the list, as he reveals he would have tried to chip his penalty – something he did on his Puebla debut in 2011.

“I did the same to score my first goal in Spain too,” he says. “I loved a Panenka. I think I would have attempted one in Istanbul if I’d been allowed to take a penalty!”

Read the full One-on-One interview with Luis Garcia in the October 2017 issue of FourFourTwo magazine. A new signings special, we chat to Bernardo Silva and Davy Klaassen about their switches to Manchester City and Everton respectively and look at how Romelu Lukaku, Alexandre Lacazette, Alvaro Morata and Mohamed Salah will fare following their big-money moves to the Premier League. Plus, we reveal the 25 greatest Champions League games ever, meet the FA Cup’s youngest manager who set up a football club following the London riots, recall Derby’s disastrous 2007/08 campaign, learn about the science behind team chemistry and – in the first of a new interview format – hear the incredible story of Rochdale midfielder Joe Thompson, who has battled back from cancer twice. Order a copy here, and then subscribe!