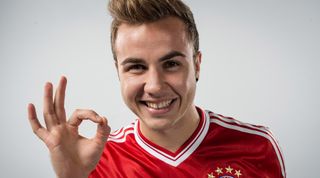 You joined a treble-winning side in the summer. Has the team been restructured to develop a new perspective?
What happened last season is as good as forgotten; for the players, in any case. Everyone started from scratch. We all know this from every club, but perhaps it's a bit more pronounced here. We have a special coach and a special squad. We formulate new goals together. One is certainly to defend the Champions League title, because nobody has done that so far.

In your first few months, what have you noticed that makes Bayern special?
I've been impressed by the exceptional standards. This is a club that has been seeking maximum success for decades.

Signing Guardiola triggered a massive response all over the world, after he dominated Europe with Barcelona. What have been your impressions of him?
A coach like Pep Guardiola attracts and fascinates every player in the world. I'm convinced he'll advance the club. It certainly won't be always easy for him this season, because changes are always difficult, even those that will help you in the long run. He has a special way of conveying the game.

Do you think you're part of a very special project?
This is a good project — and there's places we want to go. But many things are still new and we have to put some pieces together.

Are you playing for the best club in Gemany?
With regards to the attention everything here receives, definitely. It's at least one step up from everywhere else.

How did you feel about the circumstances of your move to Bayern? There were hostile reactions from the Dortmund fans...
I would have hoped for a more harmonious farewell. It was an entirely new situation for me, not only because of the reactions but also that I was living at home with my parents and dared to make the move to another club in another city for the first time. But it's a hallmark of Bayern that they make it as easy as possible for you, and offer you every conceivable support.

It looks as if you left a very good club for an even better one. Was that the reason you signed with Bayern?
After all those years in Dortmund I wanted to start something new. A new team, a new coach, new impulses. I had the feeling it would take me forward. You have to prove yourself all over again - Bayern is a good place for that.

How does it feel as a highly talented, highly rated player, to join a team that has more highly talented, highly rated players than any other?
It helps you develop and become better - physically, mentally and in footballing terms. You have to assert yourself all over again. It's great to be playing for a club that has so many outstanding players. Here I see the chance to grow and make progress.

In Dortmund, you were a star. But at Bayern you're just one of many...
But that's one of the things Bayern offer you - there are many people you can learn from.

For many people, Dortmund represents passion, and heady, exhilirating football. You get the impression everything's more calculated and sober at Bayern?
The club stands for a certain philosophy - it's about winning possession and keeping possession, allowing the opposition few chances. Improving at this was one reason I came here.