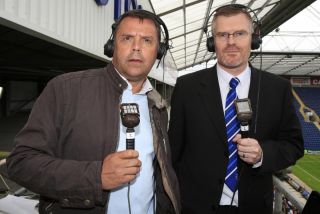 Goalkeeper
Neville Southall
At the time I just thought he was the best in the world – it was just a shame Wales didn’t get to the World Cup or European Championships. People likened Peter Schmeichel to him, but I thought Nev was better.

Right-back
Viv Anderson
As a centre-forward, you’re always told to pull away to the back post because the full-backs are generally small, but you couldn’t really do that with Viv because of his height. When he was at Forest and Arsenal, he was the best right-back in the country. He loved to get forward and score goals.

Centre-back
Klaus Augenthaler
A classy defender who had an imposing stature and an aura that only the best players possess. I was up against him when Everton met Bayern Munich in the Cup Winners’ Cup semi-final in 1985. Although we physically battered them at Goodison, he still stood out.

Centre-back
Kevin Ratcliffe
Hansen and Lawrenson were great defenders at the time, but I liked playing them because they didn’t like the physical side. Rats, however, could mix it up. I played against him for Wales a couple of times and he could kick you!

Left-back
Kenny Sansom
He was like a modern-day full-back, who loved to get forward and overlap at every opportunity. He gave Arsenal an added dimension down their left-hand side. You look at Ashley Cole in his pomp at Arsenal and ask “Was he any better than Kenny Sansom?” I don’t think so.

Right-midfield
Trevor Steven
A wide midfielder who was good on the ball, scored goals and was good in the air. With him on one wing and Kevin Sheedy on the other, it was a dream for me and Andy Gray as they got the ball in the box as early as possible. He was underestimated by England, who didn’t realise just how good he was.

Centre-midfield
Graeme Souness
A hard player, with a presence about him, he could score goals and change games. You talk to Liverpool fans now and they say Steven Gerrard’s a great player but when you ask them whether he’d have got in that ’80s side ahead of Souness, they’re not so sure. That shows you what a great player he was.

Centre-midfield
Enzo Francescoli
We played against Uruguay in the 1986 World Cup and he played just off the front two – with everything going through him. Uruguay were animals that day, but he stood out as he was the one player who had that touch of class about him.

Left-midfield
Davie Cooper
As a Rangers fan, I followed his career. He scored an outrageous goal against Celtic in the Dryborough Cup final, when he played keepy-uppy past four defenders before scoring. Should have had so many more caps.

Forward
Kenny Dalglish
When I first came down here as a young boy, I used to watch Liverpool at every opportunity and he was awesome: great touch, not the quickest, but could score all manner of goals. Ian Rush would be the first to admit that Kenny helped him score the number of goals he did.

Forward
Ian Rush
You see players today holding the line, then bending their runs in, but he was the master. In one-on-one situations, I haven’t seen anyone better - he’d waltz round the keeper, never flustered, never snatching at anything. He could also score right foot, left foot, headers, and he worked his socks off.

MANAGER
Jock Stein
I didn’t have long with him – in fact I was in the side the night he died – but everything people had said about him was true. It was just a shame I never got more opportunities to play for him.

SUBSTITUTES
Andy Gray
He doesn’t like me saying it, but he was one of my idols as a kid! He had a massive influence on me when he came to Everton and had a tremendous will to win. People thought we might be too similar but that wasn’t the case. I also did his running for him as he was getting old!
Gary Lineker
Links was incredible. He’d never join in outside the box, but made great runs and knew where the back of the net was. After his spell in Barcelona he came back an even better all-round player.
Bryan Robson
A tough player you couldn’t bully. A box-to-box athlete, up for every battle, and could score goals. With his injuries, some say he was too brave for his own good.
Peter Reid
Signed for Everton when people thought he was over the hill with injuries, but he came and had a massive influence. He did the messy bits in midfield and played in the 1986 World Cup on the back of his performances for us.
Preben Elkjaer
I played against him in the World Cup when he was up front with Michael Laudrup. A big, strong, powerful forward who could play a bit as well.