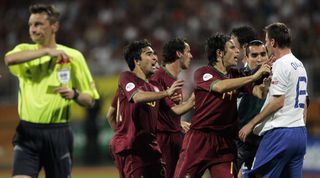 Back at World Cup 1962, David Coleman appeared on our television screen, besuited and looking exceptionally stern. His tone and demeanour was that of a man about to announce the death of Her Majesty. Instead, he was pondering the death of football.

“The game you are about to see is the most stupid, appalling, disgusting and disgraceful exhibition, possibly in the history of the game,” he intones. “The national motto of Chile reads 'by reason or by force'. Today, the Chileans were prepared to be reasonable. The Italians only used force. The result was a disaster for the World Cup. If the World Cup is going to survive in its present form, something has to be done about teams that play like this.”

The Battle of Santiago went down in legend as one of the grubbiest fixtures in history – but 95 per cent of us would be fibbers if we didn’t admit to thoroughly enjoying every moment of the hackfest that ensued. Indeed, Coleman’s announcement almost certainly got people scuttling to their tellies in a way that a nice, clean, fair contest never could. The World Cup survived.

The 2006 tournament suffered in a similar way. It is now remembered for the 'wrong' reasons – reasons that we condemn, and probably correctly – while thoroughly enjoying on the sly.

World Cups are fluid entities too, and collective memory is an odd thing. English fans now recall month-long events in which innumerable things occurred and parcel them up into convenient little packages: '66 is a line of iconic commentary; Mexico '70 a sunny snapshot of Brazil walking the ball past Italy; '86 a handballing scoundrel and a wonder-goal; '90 a man crying.

And 2006? 2006 was one big, long stupid, appalling, disgusting and disgraceful exhibition, at least when you strain back eight years to remember the bullet points.

Think Materazzi’s oafish taunting and Zizou’s violent riposte. Rooney’s stamp on Ricardo Carvalho and Cristiano’s wink after his Manchester United team-mate was subsequently dismissed. The Battle of Nuremburg between Portugal and the Netherlands. The utterly dire 0-0 between Switzerland and Ukraine. Graham Poll sending a man off with a unique third yellow card.

But is it fair to recall 2006 entirely in a way that would have horrified the German tourist board as they meticulously planned to warmly welcome the world under their motto “A Time To Make Friends”?

Yes and no, we suppose. Each incident is different. The easy ones first: the Swiss and Ukrainians can hardly be blamed for producing a game so boring that fans across the globe must have wished there was some way that both sides could lose. And Poll’s offences, while moronic, can only be attributed to a terrible day at the office: during a chaotic 2-2 bout between Australia and Croatia, he missed a blatant handball from Stjepan Tomas that would have given the Socceroos a penalty, gave a second yellow to Josip Simunic without remembering he’d already had one (a third eventually saw Simunic trudge off), and he even blew the final whistle just as an Australian winner from Tim Cahill was whistling into the net.

It didn’t matter too much: the result wouldn’t have affected the Aussies' second place finish in the group behind Brazil, and the lasting effect was on poor old Poll: “I have to live with it. I’d rather be known for officiating a World Cup final, but I’m not,” he sobbed.

The Portugal-Netherlands warfare was certainly a low point, although as a piece of theatre, is was outstanding. Ref Valentin Ivanov had the busiest night of his life: the first cardable offence came two minutes in; by the end of the match Portugal had garnered nine yellows and two reds, the Dutch seven and two respectively. The offences are too manifold to list, but incredibly high challenges, shameful simulation, face-clutching, 10-man paggas and a Luis Figo headbutt that he didn’t even get dismissed for can all be found here. Revel in men hurting each other to a jaunty Vampire Weekend soundtrack.

Commentator Gary Bloom brilliantly referred to the “naughty boys’ corner” as the dismissed men gathered, off pitch; afterwards, Big Phil Scolari celebrated shamelessly with a Portugal flag and said: “Jesus Christ may be able to turn the other cheek, but Luis Figo isn’t Jesus Christ.”

And as for the other mayhem, Rooney’s stamp on Carvalho was certainly a red card in retrospect, although the BBC analysts, along with pretty much everyone else in the English media, focus on the Portuguese hounding of the ref afterwards. Alan Shearer watches Rooney stamp on another man’s testes and then wonders “are we too honest?” as Portugal protest; Shearer then claims that Rooney could rightfully: “go back to the Man United training ground and stick one on Ronaldo.” Like this?

The truth behind the ensuing tabloid pantomime? “I like Ronaldo – always have done,” says Rooney in his biography about the incident. “The foul was a total accident, but I couldn’t blame him for what he did – he was trying to win the game for his country. In the first half I’d tried to get him booked for ping, so I was as bad as him. Everyone decided we were the best of enemies and his wink would spell trouble for United. ‘The fans will be going mad over this one’ I said [to him].”

And Zidane? That the undoubted defining image of an entire tournament was an act of aggression usually reserved for provincial high streets at closing time is still a shame – even if the supposedly unforgiveable act itself has been justified in numerous different ways. Materazzi’s reputation for provocation, and the goodwill towards Zidane as a Muslim, French and Algerian icon, as well as a genius with the ball, made it more acceptable for most.

Zidane’s articulate explanation also helped. “If I say sorry, I would also be admitting that what he himself did was normal,” said the Frenchman. “Things happen on the pitch but I could not stand it there. It is not an excuse. But my mother was ill. She was in hospital. More than once they insulted my mother and I never responded. To apologise for this? No.

“If it was Kaká, a regular guy, a good guy, of course I would have apologised. But not to this one. If I ask him forgiveness, I lack respect for myself and for all those I hold dear with all my heart. But I apologise to football, to the fans, to the team.”

His foul is now so iconic that it has been immortalised in a statue by Algerian artist Adel Abdessemed; it resembles a depiction of a war hero. “In the piece, we can see that Zidane is stronger than the Italian, he has dominated him,” the sculptor told FourFourTwo. “But in the end Materazzi won. Materazzi embodies modern mankind. He betrayed the politeness of human nature by insulting Zidane’s mother, and in Zidane’s culture, what he did – a headbutt – symbolises castration of the other man. What they gave us is a form of ecstasy.” Crikey.

So should we be ashamed for revelling in it all, even though taken collectively, it wasn’t really all that bad? Maybe a little, but while 2006 produced more controversy than fine play (although connoisseurs of good defending will have found much to enjoy), we can forgive ourselves as only human for really enjoying most of it. It wasn’t a great World Cup, but the Chinese curse “may you live in interesting times” certainly applied, and the Battle of Santiago’s continued must-watch status ensures that it’s nothing new.

2006 was the pre-Twitter era: should anything resembling Zidane, Rooney or Ronaldo’s infractions occur this year, our thumbs are ready to pass instant judgement. Spain’s 2010 victory shows that a wonderful team can still be the headline of a major tournament, but in the era of online outrage and relentless replay scrutiny, don’t bet against similar levels of overreaction and disgrace prevailing once more.