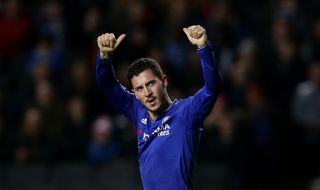 1. Hazard back on song

Five weeks ago there were banners calling him a 'rat', as Eden Hazard was blamed by fans for the exit of Jose Mourinho. At stadiummk, things had changed. He had rolled in a simple penalty, but it was greeted by the biggest cheer of the afternoon as the Belgian turned to acknowledge the Chelsea supporters. It was a telling response.

Oscar may have bagged a hat-trick, but it was perhaps Hazard's long-awaited return to form that was the most uplifting part of this afternoon for Blues supporters. He has been linked with a summer move to Paris Saint-Germain, and these were fans keen to show their appreciation rather than push him further towards the exit door.

True, the hosts extended such a welcome to Chelsea that each place in the Blues' starting line-up came with 10 yards of free space. Pick a pass? Have a shot? No problem! Every luxury was on offer to the visitors. Where's Dele Alli when you need him? MK Dons were not a good side, of that there can be no doubt, and staples of the game like defending and organisation weren't really their thing. Asked afterwards if he had learned anything from the game, MK Dons boss Karl Robinson replied: "Yes – don't win the third round!"

But poor opposition hasn't stopped Hazard from looking unconvincing in other matches this season. Here he was vibrant and industrious from the start, darting into space and linking up superbly with others – Cesc Fabregas and Oscar in particular – with effortlessly accurate one-touch play. Everything looked so natural and easy. This was the Eden Hazard everyone knew existed, but hadn't been seen for some time.

Within three minutes he'd started a move that created an opening from which Diego Costa should have scored. Hazard has only two Premier League assists to his name this term, compared to nine last season, but he could have had two FA Cup assists early on here as Oscar twice collected passes and failed to find the net when he should have done better.

That a player like Hazard had not scored for Chelsea all season was an incredible statistic. He had scored four times for Belgium, but there was hesitation as he raced clear in the first half before seeing his shot turned onto the post by keeper David Martin.

It needed a penalty to finally break that duck, albeit one he won himself early in the second half. The cheers had already started when Hazard picked up the ball to take the spot-kick. Oscar, Chelsea's penalty taker in recent weeks but already with a hat-trick to his name, offered words of encouragement to his team-mate as he stepped aside.

Hazard's penalty was typically calm. Every Chelsea player notably dashed to congratulate him, his popularity seemingly as strong as ever inside the dressing room. By the time he was substituted on 64 minutes, he had set up a goal for Bertrand Traore too.

This was only Hazard's third start under Guus Hiddink – and in one of those he limped off early at Crystal Palace. During his absence the interim boss has already revived Cesc Fabregas – the other two supposed 'rats', as labelled by that infamous Stamford Bridge banner. If this performance was anything to go by, Hazard's winter of discontent could be a thing of the past.

Asked about Hazard's goal, Hiddink said: "The ball was rather static but it was OK for him, he has had a difficult time with injuries. We have a hierarchy with penalties and Oscar is the first one, but they gave him this penalty. It's good for him to have scored, he's coming back now after a long absence and he needs the rhythm of these games."

There was something quite quaint about the pantomime way in which MK Dons supporters booed John Terry and Diego Costa.

The Championship club are so young that their fans don't appear to have yet developed the cynicism and world weariness of many other supporters up and down the country. The percentage of children in the stands gave this a similar feel to an England under-21 international at times and just booing Terry and Costa was enough – there was none of the vitriol that the duo generally face at other grounds up and down the country.

Terry confirmed after the game that he will leave Chelsea at the end of the season and he had a relatively easy afternoon at stadiummk after being reunited with last season's regular centre-back partner Gary Cahill.

The Blues did concede their first goal away from home since Hiddink returned for a second spell as interim boss, although that needed a huge deflection off Nemanja Matic to send Darren Potter's 25-yard effort looping over Thibaut Courtois. Otherwise the Blues and their departing captain, leader, legend were largely untroubled. He had been one of the game's peripheral figures until his surprise post-match revelation thrust him into the headlines.

Oscar's revival after Mourinho's exit was instantaneous. A rabona 10 minutes into Chelsea's first game without the Portuguese boss, against Sunderland just before Christmas, said it all. Immediately he was playing with a freedom that suggested the weight of the world had just been lifted off his shoulders.

Oscar scored only once that afternoon, from the penalty spot. This time at MK Dons, he had three goals before the interval. Reports spread of his supposed discontent during Mourinho's tortuous final weeks at Stamford Bridge, but he couldn't have looked much happier under Hiddink here.

In truth, he could have had more. It really wasn't stretching it to suggest that he could have had six goals before half-time. Three was impressive enough, though, in an opening period when Oscar constantly raided into the penalty area from the right, finding gaps and causing mayhem.

Two chances had eluded him before the Brazilian slid in Chelsea's opener from a Costa pass. That finish was routine, his second goal less so with a brilliant angled finish after collecting a pass from Ruben Loftus-Cheek. Then came another low shot narrowly wide, before his hat-trick was completed inside 44 minutes as he drifted infield and fired unerringly into the corner.

Cesc Fabregas had played in a more advanced position in last week's win at Arsenal, when Matic and John Obi Mikel were both selected to shield the defence. On this occasion Hiddink felt he could afford to leave out Mikel and play Fabregas deeper alongside Matic.

It could have potentially reduced Fabregas's attacking impact, but it didn't. The Spaniard was superb in the first half in particular, pulling the strings and picking out his passes brilliantly in quarterback fashion. He was able to carve open MK Dons' vulnerable defence with some incisive through balls as well as advancing into more attacking positions to link up with Hazard.

Fabregas and the Belgian had only started together once under Hiddink before this – and that was the Palace game when Hazard lasted only 16 minutes. This was the first time they had shone together for some time, and a reminder of how devastating they can be when they do.

They're a duo who have shown themselves capable of deciding the Premier League title race when on song. MK Dons didn't really stand a chance.

5. Traore shows Costa how it's done

Diego Costa's movement undoubtedly played a part in the way Chelsea ripped MK Dons apart in the first half, and he had netted six times in six games under Hiddink previously, but the striker's finishing let him down on this afternoon.

There was almost a training ground feel to the laid-back fashion in which he tried to convert a pass from Oscar in the opening three minutes, almost as if he knew there would be plenty more chances where that one came from. He'd have been right, of course, although a goal never came for him personally as he failed to convert a Baba Rahman cross from close range too, although Costa did provide the assist for Oscar's opener.

The forward was replaced by Bertrard Traore after 57 minutes and the 20-year-old from Burkina Faso needed only five minutes to show Costa how it's done, firing in his first goal for Chelsea.