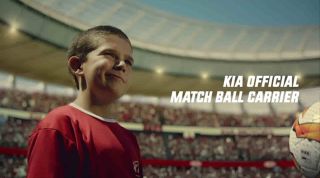 As a young football fan, what do you think?

This is football, and now you know what it feels like. You hear the roar, you see the players come out and now you know that feeling before a game: the excitement, the expectation… the fear.

Now imagine you’re on that pitch and you’re leading out that team in a crucial European match. Your team. You’re out there in front of 58,000 expectant supporters who all feel that hope just like you do – only they’re in the stands and you’re down there, on the pitch you’ve always dreamed about playing on, with the players you idolise every week.

Thanks to Kia, dreams like this have been a reality. Arsenal fan Jaiden took the Hero’s Walk against Vorskla Poltava in the Gunners’ Europa League triumph, watching his team run out 4-2 winners at the Emirates Stadium and seeing his favorite player Pierre-Emerick Aubameyang score in the north Londoners’ rout for good measure.

“Most of my friends said they were going to watch it on TV and that makes me more excited,” he beamed beforehand. “I feel like it’s going to be one of the best moments in my life.”

But you don’t have to be young to experience that thrill. Take Sporting CP fans João and Patricia, for instance, who had the chance to meet their heroes when they visited the Portuguese giants’ training ground for the day.

Cristiano Ronaldo, Luis Figo, Nani: they were treading the same ground as some of their heroes. “I’ve never had the chance to speak to a player,” said Patricia. “People bump into them on the street and take selfies, but that’s never happened to me.”

But good things come to those who wait, and that did happen Patricia after her Kia experience. If meetings with Brunos Fernandes and Gasper weren't enough, she and João also got to interview striker Abdoulay Diaby for good measure.