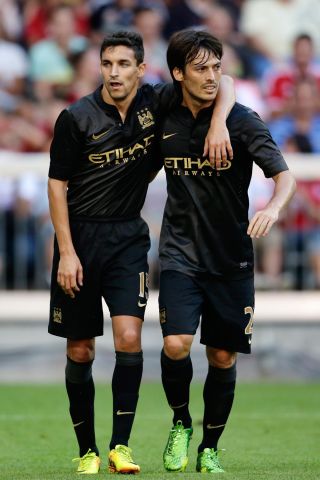 If there is one type of player that Manuel Pellegrini appreciates, it’s creative attacking midfielders.

This is the manager who embraced Juan Roman Riquelme at Villarreal, got the best out of Santi Cazorla at two different clubs, and developed Isco so wonderfully last season at Malaga. There’s a sense of structure about his sides, but always great attacking purpose.

Monday evening’s highly impressive 4-0 victory over Newcastle demonstrated City’s immediate confidence in the new system, and a particularly interesting part of the side was the performances of the two wide midfielders. The two Spaniards, David Silva and Jesus Navas, played different roles – but provided City with great balance and different attacking options.

Silva is the playmaker most likely to thrive under Pellegrini. The Chilean coach traditionally likes working with typically Spanish wide players - ones that drift inside into the centre of the pitch, allowing the full-backs forward on the overlap. Cazorla thrived in that role under Pellegrini, and Silva approaches the game in a similar fashion to his compatriot.

A predominantly left-footed player, Silva might appear more naturally suited to playing from the right, from where he can cut inside and slip balls through the defence with his favoured foot. A good early ball with his right on Monday evening showed his flexibility, however, and he combined nicely with Edin Dzeko for the opening goal.

On the other flank, Navas is a completely different type of player. A traditional, old-fashioned winger who enjoys getting to the byline and whipping in crosses – his relationship with fellow City new-boy Alvaro Negredo at Sevilla was fruitful – he’s more likely to hug the touchline than Silva, which stretches opposition defence, giving his colleague more opportunities to slip the ball through the defence. Roberto Mancini rarely used direct wingers, often preferring to use both Silva and Samir Nasri, packing the centre of the pitch – the signing of Navas brings something new to City.

Navas did vary his positioning and movement, however. In the opening stages of the Newcastle match he occasionally drifted inside, at one point even popping up on the left wing, helping to overload the hapless Mathieu Debuchy.

Nevertheless, his best work came when he stayed wider and played his natural game, and his relationship with right-back Pablo Zabaleta showed great promise throughout the game. Zabaleta might have been worried about playing in combination with a proper winger – when fielded behind a ‘drifter’, he logically has more space to overlap into - but the Argentine adapted his game well. When Navas stayed wide, the fullback supported him closely, and sometimes took the opportunity to move inside, making diagonal, ‘underlapping’ runs towards goal, popping up in the box for an early chance.

Clearly, the balance and variety provided by the contrasting wide players proved effective, but it’s worth remembering that under Mancini the wide players often combined directly, most notably in the famous 6-1 victory at Old Trafford. In that win, both Silva and James Milner repeatedly crossed the pitch to overload the full-backs – and it would be a shame if that direct link was lost.

Therefore, it was encouraging that Silva and Navas combined on multiple occasions, despite starting on different flanks. This happened in different ways. Silva would drift across to the opposite flank to play passes to Navas – in fact, he was the second-most frequent passer to the winger, after Zabaleta.

Navas is more likely to pass to Silva through long, direct switches of play. He hit huge passes towards the opposite flank, and also produced an excellent low cut-back all the way across to left-back Gael Clichy at one point. That direct switching of play is very different to the system under Mancini, when play rarely flowed down the flanks.

There was also a promising late cameo from Samir Nasri, who powered past Debuchy to roll in the fourth goal. Although his spell at Manchester City has been relatively underwhelming so far, the Frenchman is the type of versatile, multifunctional midfielder Pellegrini might take to, and could be used in matches where the Chilean coach only wants to field one striker.

But the key feature of City’s play was the performance of the wide players who started – they offered balance and variation, and Pellegrini’s side will offer an all-round attacking threat this season.