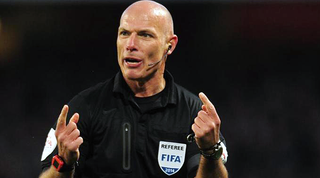 Hi Howard. Would you take this deal: You get to live for an extra 10 years, but must talk like Adele until you die?

Hi pal. That’s an interesting one. I’d have to contextualise it. If I was going to die next week, at 45, I’d have Adele’s voice like a shot to give me the extra 10 years. But if you’re talking about extending from 85 to 95, I don’t think I’d bother. It’d be good for singing, though, right?

Indeed. You were a policeman as well as a referee. What was the craziest arrest you were ever involved in?

I got called out to a naked guy chained to a fence. His wife had found out he was having an affair. On the way back from the pub, she had suggested they have some … what shall I say … a bit of… ‘sexual activity.’ He got naked, then she tied him up to get her revenge. He was kicking off, so we had to arrest him.

Have you ever committed a petty crime yourself? A Freddo into the jacket pocket in Asda, perhaps?

I’ve nicked a few toilet rolls from hotels. When you’re running low at home, you might slip a couple into your suitcase. The way I justify it is: it’s not my fault I didn’t get the s**ts during my stay. It is legitimately my toilet roll to use.

Thief! Who is more childish: drunk people being arrested, or petulant wingers moaning about a free-kick?

They’re similar. The difference is that, as a referee, you can’t restrain people. Sometimes you will instinctively grab a player to get them out of a situation, but we’re advised not to make contact. Being 6ft 2in isn’t really advantageous. In both situations, you have to just calm people down and try to manage them.

Did you ever nearly snap and get a player in a vascular neck restraint?

Every time Craig Bellamy was on the pitch! He was a great footballer, but it’d always be a psychologically tough afternoon whenever Craig was about.

I always liked the Bobby’s helmet. When I was in my mid-20s, I thought I looked good in it, especially as my hair was crap. It was thinning, which I hated, so the helmet covered it up. I thought I looked sexy, young and tough. But then I’d take it off and I’d be a mess.

Why are all the best referees bald?

Good question. [Pierluigi] Collina was the greatest, undoubtedly – an iconic figure. When he was an assessor, he’d give you that look and then you would just start confessing to things that you hadn’t done. I’d love to come up with a scientific reason why bald-headed people do well as referees, but it’s not due to bullying or being toughened up by hair loss. It’s purely a coincidence.

So who is history’s greatest baldy?

For me it’s Mikhail Gorbachev. It must have been tough for him because, as well as having a receding hairline, the process revealed that birthmark of his – a double whammy for Mikhail. But I guess perestroika did come out of it.

Very true. The last referee we spoke to, Graham Poll, claims that Uriah Rennie would be able to defeat you in one-on-one combat. Do you agree?

Yeah, probably. He’s certainly the ref I’d be most wary of – though I suspect all that stuff about him being a black belt is a myth he’s just refused to deny.

Do you think running backward is an underappreciated skill? Could you beat Jess Ennis in a backward race?

It is, but I’d only beat Jess if I was on a motorbike! It’s weird, though – some refs can run as fast backward as they can forwards. I know an assistant who runs faster sideways than I do forwards.

What’s the oddest dream you’ve had?

Man in the Middle: The Autobiography of the World Cup Final Referee – published by Simon & Schuster – is available now.

This feature originally appeared in the January 2017 issue of FourFourTwo. Subscribe!