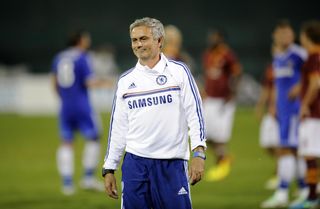 In his first spell at Chelsea, Jose Mourinho was frequently characterised as a defensive-minded coach.

It was a reputation earned in his first season at Stamford Bridge, when Chelsea won the title primarily because they conceded an astonishing 15 goals all season. At the other end, they scored 15 fewer than second-placed Arsenal.

They registered exactly the same number of goals the following campaign, although their football appeared more free-flowing and attractive. The damage was already done, however, partly because Mourinho's arrival in English football seemed to prompt an obsession with defensiveness across the league - his ruthless 4-3-3 worked excellently against sides playing 4-4-2 by taking advantage of the extra midfielder, and other managers tried to replicate his system.

As Gianluca Vialli, one of Mourinho's predecessors at Chelsea, once opined, lots of Premier League 4-5-1s consisted of little more than removing one centre-forward, and introducing a holding midfielder. Mourinho, supposedly, was to blame as the Premier League's 'goals per game' ratio plummeted.

It wasn't necessarily that Mourinho was defensive, however - it was that he favoured a functional, occasionally joyless counter-attacking system that included no true creators. Frank Lampard was superb in Mourinho's first spell, but primarily because of his drive and goalscoring ability, rather than his playmaking. Damien Duff and Arjen Robben were often devastating on the break, but started in deep positions and charged powerfully towards goal - it was efficient, but not beautiful.

Joe Cole, meanwhile was converted into a disciplined, tactically intelligent wide man. Mourinho made him a proper player, but many mourned his lack of individuality. Realistically, the closest thing Chelsea had to a true playmaker was when Eidur Gudjohnsen was fielded in a midfield role.

At Real Madrid, Mourinho's approach was somewhat different. His regular starting XI included a deep-lying playmaker in Xabi Alonso, a hard-working winger in Angel Di Maria, a mobile, wispy No.10 in Mesut Ozil, a wide forward in Cristiano Ronaldo, and a pure striker. Sami Khedira provided the midfield stamina to allow everyone else some level of creative freedom, but this was a very different Mourinho side - even if the players eventually adapted to a strict system.

In fact, Mourinho sometimes went overboard with playmakers. In a 2-0 home win over Celta Vigo last season, he managed to play two deep-lying playmakers with Luka Modric partnering Alonso, plus Kaka and Ozil alongside Ronaldo. Clearly, that five-man midfield - if you can call it that - was packed with creative energy.

Having triumphed in the Champions League with a bus-parking exercise Mourinho would have been proud of, Roman Abramovich now wants Chelsea to become more adventurous. By assembling Juan Mata, Oscar, Eden Hazard and Andre Schurrle, he possesses two excellent creators and two direct wide forwards. Squad rotation will certainly be a feature of Mourinho's team selections, but it will be fascinating to see how he includes three of these players together. Kevin De Bruyne and Lampard are also capable of playing attacking midfield roles, although will probably be used deeper.

Mourinho typically trains his side in two major formations. At Chelsea, this is likely to be the 4-3-3 and the 4-2-3-1: the formation he achieved success with at Stamford Bridge the first time around, and the system he's used more recently with Inter and Real.

"We will play 4-2-3-1 in the first game, my favourite system," he said ahead of one of Chelsea's pre-season friendlies, against a Singha All Star XI. "Although sometimes I change the triangle and play with one in front of the defenders and two players up. Other times I play with double midfielders and a number 10. This is a team where we have not one or two but three or four players who like very much to be a No.10: De Bruyne likes it, Oscar likes it, Mata likes it, Hazard likes it. It is a natural system for all these players to play."

The 4-2-3-1 will require at least one wide player to be strict in a defensive sense, however. Usually that formation defends with two banks of four, with the wide players dropping alongside the holding midfielders in the defensive phase of play. At Real, Mourinho was happy to allow Ronaldo freedom to stay in advanced position, to not track his full-back. It's special players that merit that kind of liberty, however. As Gary Neville recalls when working with Ronaldo at Manchester United, "Darren Fletcher would say that we'd have to work around him, because he'd always do more harm than opposing players he was leaving free to go forward."

Mourinho doesn't have a wide forward of that level, but it's interesting that Schurrle was effectively used in the Ronaldo role at Leverkusen last season. He rarely tracked the opposition right-back, and instead stayed in positions where he could prompt counter-attacks. It remains to be seen how disciplined he is defensively.

Hazard and Oscar, meanwhile, were converted into more functional players under Rafael Benitez last season. Whereas Roberto Di Matteo allowed them positional freedom - which meant them remaining high up the pitch - Benitez immediately ordered them to stay deeper. Oscar, in particular, is an extremely hard-working and tenacious player.

The big question mark is about Mata. Linked with a move away from Chelsea earlier in the summer, Mourinho doesn't seem convinced about the Spanish playmaker. "With Mata, I need to get to know him better," he said earlier in the summer. Later, he clarified his position. "Of course he fits into my plans, I have my idea about him, about where he produces better and where he has more difficulty," he said. "We will try to help him perform better in those situations. I've always liked a right-sided player to be left-footed. I started with Robben and Duff, then [Goran] Pandev at Inter and [Angel] Di Maria and Ozil. Many clubs do it. It's more than a tendency."

However, Mata is surely Chelsea's best footballer, and certainly their most creative midfielder. Mourinho might not have used a playmaker at Chelsea the first time around, but having embaced Deco, Wesley Sneijder and Mesut Ozil in his three other major managerial roles, there's no reason why he shouldn't take to Mata. Used centrally, the Spaniard could become the Premier League's best player.