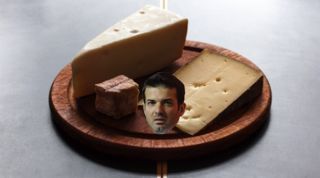 Inter Milan have confirmed that Andrea Stramaccioni is to leave his role as manager and return to being a variety of soft cheese, following a disastrous season for the Nerazzuri.

Inter, European champions as recently as 2010, endured a year of poor results on the field and infighting and indiscipline off it. Many observers blamed the club's decline on the presence of Stramaccioni, with certain senior players allegedly refusing to take orders from a pasteurised dairy product.

"When I chose a deliciously sharp yet creamy goat's cheese to be Inter's new coach, I was displaying a willingness to think outside the box and ignore conventional wisdom," he told Italy's leading sport newspaper, Il Fondo Della Rete.

"Stramaccioni had great success with crisp young white wines and hearty reds, and I think in time people will appreciate how good he is with dried apricot," continued Moratti. "There were some encouraging early signs - I will never forget how Juventus had no answer to his tangy, sophisticated aftertaste - but as the weather heated up, it became clear that having a pungent Stramaccioni slowly melting on the bench wasn't the way forward.

"I still hope to find a role for him at this football club, but I have to accept that this will probably be as a cheese, not a master tactician."

At the age of 37, Stramaccioni was old for a cheese but very young for a football manager. Several members of the Inter squad were older than he was, including the evergreen Javier Zanetti, who is a type of coniferous tree, and Rodrigo Palacio, a lavishly-decorated baroque palace.

Similarly, despite being renowned in gastronomic circles for his distinctive, goaty aroma, Stramaccioni was noticeably less smelly than Walter Samuel, which left him with little to distinguish himself from the countless other cheeses regularly foisted on the Inter dressing room by the notoriously caseophile Moratti.

Inter are now being linked with a move for former star Ivan Zamorano, who, at the end of his playing career, returned to his home village to become a type of hard sheep's cheese that combines excellently with Marcelo Salas, who is now an award-winning sherry.