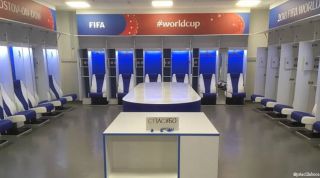 Japan were 2-0 up in the 52nd minute on Monday night before goals from Jan Vertonghen (69'), Marouane Fellaini (74') and Nacer Chadli (90+4') condemned the Asian nation to a crushing last-16 defeat.

But even though Japan were cruelly denied their first ever appearance in a World Cup quarter-final, it emerged post-match that the players had left their Rostov Arena dressing room squeaky clean with a handwritten note.

FIFA general co-ordinator Priscilla Janssens tweeted a photo of the tidy space and wrote: "This is the Japanese dressing room [pictured above] after losing to Belgium in the 94th minute.

"Thanked their fans in the stadium, cleaned up everything (bench and dressing room) and spoke to media. Even left note with 'thank you' in Russian.

"What an example for all teams! Privilege to work with!"

It wasn't just the players who kept things neat and tidy, though: the supporters also cleaned up in the stands – as is customary in Japanese culture – despite their crushing late loss.