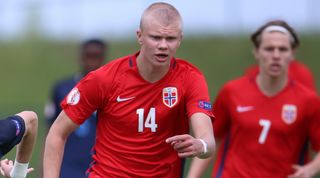 Ole Gunnar Solskjaer's Molde thrashed the Eliteserien leaders 4-0 on Sunday as Haland showed why he's considered one of the hottest prospects in Europe right now.

Haland now has six goals in 13 appearances for the senior team this season after putting away four in Bergen with all his strikes coming in the game's opening 20 minutes.

The 17-year-old, who is the son of former Manchester City defender Alf-Inge, showed off all his best attributes against a Brann side who are four points clear at the top of the league.

His performances appear to have drawn interest from across Europe and Solskjaer says Haland reminds him of Romelu Lukaku.

"He can become a top striker for sure," he told Eurosport post-match.

"He reminds me of the type of striker Lukaku is. There is a lot of interest in him. We have had offers from good clubs this year but we have rejected them. Former Champions League winners."