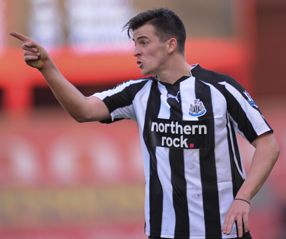 "People have seen me play, so obviously they know what I’m going to do. I am what I am and to play in the Premier League you need to be unique," says Joey Barton.

"There's a thin line as every player shows every week, in every game across the country and sometimes players overstep that line and that's the way it is."

You may have heard of him. You may have read about him too, and a little too often for the wrong reasons. He sits down on an old leather settee at Newcastle United’s Little Benton training complex. Struggling with flu at the time, the Magpies No. 7 sucks on throat lozenges in between his answers.

"I mean, to play in the elite league in the world, at the highest level, you can’t be a normal character. You have to have something about you that lets you run out and kick a ball in front of 50, 60 70,000 people," he says hoarsely.

"There is probably a little bit of quirkiness in top players that enables you to go out and perform at the highest level.

"If you were normal you wouldn’t be able to do that because you'd freeze."

A controversial character, Barton is much maligned for the things he’s done - both on and off the pitch. Since moving to Newcastle United from Manchester City in the summer of 2007 for £5.8 million, he’s suffered with injuries, seen managers come and go and even been imprisoned.

"For me it's when I overstep that boundary that I get in trouble and obviously I've had to work hard over the last few years to try and stay on that even keel," says Barton, who hit the headlines earlier this season for punching Blackburn Rovers player Morten Gamst Pedersen in the chest during Newcastle’s 1-2 defeat to Rovers at St James’ Park.

Barton was given a three-match ban retrospectively by the FA and was forced to sit out games against Fulham, Bolton and Chelsea. He issued an apology through Newcastle United at the time.

"I think I've done admirably since I've been back in the Premier League, barring the Blackburn incident which, you know, it happens.  I've said what I had to say on the matter, and for me now it's finished," he says.

Under previous manager Chris Hughton he seemed to finally discover the form in midfield that he was renowned for at Manchester City. His vision to pick a pass out and to play a ball early was second to none again. Then Hughton was shown the door by unpopular owner Mike Ashley and ex-West Ham boss Alan Pardew was brought in.

With Newcastle back in the top-flight after winning the Championship last season, Barton has proved himself to be indispensable within the team, chipping in with four Premier League goals and seven assists to his name.

"Players always enjoy playing, more so than training and I’m quite confident in my ability.

"Whenever any manager comes into a football club they have their own philosophy and we as a squad are still getting to know Alan and his philosophies but there’s certainly been encouraging signs so far," he says.

Inconsistency has dogged the Magpies at times this season; with Newcastle picking up points at grounds no one expected them too. They aren’t the only team to do that though and Barton believes results between teams this season are too hard to call.

"It's a weird season for me, because it's the first season that it's happened, everyone can literally go anywhere and win.

"I think we've show�n that if we as a squad are right, then we can cause anyone a problem. I think we've matured a lot more as a side and that in itself will pose threats.

"It's a crazy league and if you're right and your team is right and one hundred per cent at it, anyone can beat anyone."

His old team-mate Andy Carroll, and Sunderland midfielder Jordan Henderson are two players who've earned their senior England debuts this season, but for Barton, another young player has caught his eye.

"I think a lot of young players in the league at the minute get overhyped and get built up a lot more than they are. I think the one who’s impressed me is the kid [Jack] Wilshere from Arsenal," he says.

"From playing against him in the Arsenal game, you could see that he's got a little bit about him. He'll put his foot in, and you don't always get that with creative players.

"Some creative players don’t tend to like getting tackled and watching him in the Manchester United game, he actually put his foot in where he needed to and he took the ball, which is a good trait.

"I think people are aware that he's a very good young player and I think he can only get stronger and stronger and especially now as he's playing week in and week out for Arsenal, something which I believe will stand him in good stead for the future."

Being back in the Premier League after a year away, playing against the likes of Manchester United, Everton and Manchester City is exciting for Barton. He made his name at Manchester City under managers Kevin Keegan and Stuart Pearce. In his time there he saw the club move from their Maine Road home to the plush City of Manchester Stadium.

City are now almost unrecognisable to the team he left, but Barton admits that when the fixture list comes out, that’s the match he looks forward to the most.

"Has a lot changed at Man City since I’ve been gone? I think that's a bit of an understatement. I think the whole club's changed, the only thing that probably hasn’t changed is the fan base," he says.

"There are still a few people at City that I know. Me and Shaun Wright-Phillips were room-mates for a long time because we both came through at the same time, and even though he's a bit older than me, we were the youngest two in the squad.

"Obviously I've got a great affection for the football club and the fans and everything they helped me do when I was a young boy.

"They have loyal fans and they deserve exciting times and obviously the amount of money they're spending and the way the dynamic of that football club has changed means its exciting times for Manchester City and its fans."

With Chelsea suffering a slump in form, and Manchester United only losing three games so far this season in the league, Barton believes the current campaign is harder than ever to put a finger on who will lift the trophy at the end of the season.

"I think Man City are in with a genuine shout of winning the title, along with five other clubs, which means for the first time in a very long time it's probably a very exciting Premier League for the neutral," he says.

"You'd do well to be able to pick a side that's going to go on and win it.

"For me though, you’d have to think Manchester United are going to win the league."

Manchester City, alongside the likes of home grown talent Adam Johnson, James Milner and Joe Hart, can field international stars such as Yaya Toure, Carlos Tevez and David Silva in their starting line-up.

The latter three were all proud wearers of the ‘Snood’ – the fluffy neck warmer footballers donned in a bid to beat the cold.

Would Barton, the robust, straight forward midfielder from Merseyside and a boyhood Everton fan, ever have considered wearing one before they were banned?

"Snoods? I literally don’t know," he says in his hoarse scouse accent.

Silence ensues as he p�auses to consider what to say next. He smiles.

"I mean if your neck's cold fair enough. What I don’t understand is why people wear Snoods and short sleeved shirts.

"I've never been one for wearing a Snood and I'd be very surprised if you ever see me with one but maybe if this cold doesn't clear up I might become a little bit feminine and put one on."

Somehow we doubt it.