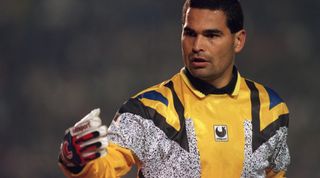 Paraguayan goalkeeper Jose Luis Chilavert scored 62 goals in his career, his size four left foot helping him become something of a set-piece and penalty specialist. The greatest of them all was playing for Velez Sarsfield against River Plate, with an incredible 60-metre free-kick.

"Some players have scored from long distance, but it was usually by chance,"says Chilavert. "This was different. I saw that [River Plate keeper] Burgos was outside the box, watching birds rather than concentrating on the game. So I started running desperately. As I arrived, I noticed the referee was in the way and shouted: 'Move!' Luckily, he did – the shot could have knocked him out if he hadn't ducked.

"I thought the ball was going too high, but then it started going down quickly. When Burgos tried to react, it was too late. I landed on the floor like an airplane and so did my team-mates. Even River players congratulated me! It was very special for me as my father was recovering from heart treatment and I could dedicate it to him.

"We won the game and I gave my shirt to the referee. It was his last professional game and, besides, he deserved it for his reflexes!"

Illustration: German Aczel. From the February 2011 issue of FourFourTwo. Subscribe!