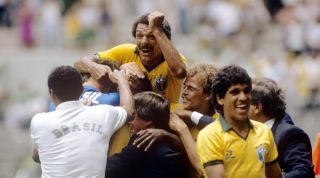 You went from making your debut for Brazil at the World Cup to being one of their star players. What happened?

I was an unknown playing for mid-table Botafogo. I didn’t expect to play for Brazil in the World Cup, but when Leandro had to withdraw from the squad I was called up to make up the numbers.

How did you get into the first team?

When Edson twisted his knee before the game against Spain, Santana wanted to play [midfielder] Alemao during practice. I spoke up and told [Brazil coach Tele] Santana he was trying to fit a square peg into a round hole – and that he brought me into the squad to play so should play me.

You scored two fantastic goals in your first two games for Brazil, against Northern Ireland and Poland, and became an overnight star. Where did it all go wrong?

I just lost it. I was poor one day but a celebrity the next and everyone knew me. FIFA named me the best right-back in the world but distractions away from the game started to affect my stamina and my concentration. I agreed to sign for Flamengo to try and get a fresh start but nothing changed. The blondes came and the training went. I was supposed to be at the peak of my career, but I wasted all the money, lost all credibility and worst of all, I lost contact with my kids.

At what point did you decide to try to turn your life around?

My life hit rock bottom when I was playing a masters tournament. After the final whistle of a game I was sat in the dressing room alone and I was a mess. Jorginho found me there and I told him that I needed help, that "no one believes in me, I can’t go on". It was like I had been following the wrong person on the wrong road. Jorginho arranged for me to take up a role at his futebol school for kids on the outskirts of Rio. At first it was just helping out around the place, but then I got more involved and started feeling back to my old self again.

Your son is a right-back like you. Have you given him advice on how to handle his career?

My son will be better than I ever was. I told him young players like him need to avoid making the mistakes I made. They need to realise that they’re not as good looking, rich or as interesting as they think they are!