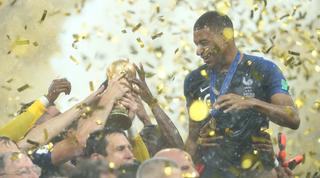 This feature first appeared in the April 2020 issue of FourFourTwo. Subscribe to the magazine now and get the first five issues for just £5!

In January, when Paris Saint-Germain were preparing to unveil their fourth kit, there was one certainty; one player in the frame to front it. It wasn’t Neymar, Thiago Silva nor Angel Di Maria; it was always going to be Kylian Mbappe.

In that picture taken in the Parc des Princes’ home team dressing room, the forward – adorned in the menacing black strip of France’s biggest football club – was more prominent than anyone else. Triumphing like a Roman emperor, he had Neymar to his right and Thiago Silva perching on the left, while Mauro Icardi and Marquinhos sunk into the background.

Shirt Alert: PSG and Jordan have released their new fourth kitWhat do you think?#PSGxJordan pic.twitter.com/zETDhnCDZSJanuary 23, 2020

But then that’s just how things are these days. Mbappe, 21 years old, is the face of PSG. Neymar may have been their best player this season, and the Brazilian’s status as the most famous member of the squad is unquestioned, but this is Mbappe’s club now. He ticks all the boxes: a born-and-bred Parisian with limitless ambition, capable of taking the team to new heights, not to mention bigger shirt sales than anyone else at the club.

But that’s not all. Mbappe is also now the face of French football. No offence to Paul Pogba, who has struggled with injuries all season, or to Antoine Griezmann, who has found it hard to settle in a tough environment at Barcelona. The same goes for Raphael Varane and Hugo Lloris, who have the trophy cabinets and leadership qualities to rival their young colleague, but not the same all-round potential. Right now, Mbappe is Didier Deschamps’ greatest asset – and you can’t picture Les Bleus doing well at Euro 2020 next summer without their shimmering No.10 shining.

Mbappe is not the first teenage genius to burst onto the scene and make a difference. He certainly won’t be the last, either.

But make no mistake: his sky-rocket to the top has been spectacular, and such a massive impact so young is almost unprecedented. Which players could argue that they enjoyed Mbappe’s level of success between the ages of 18 and 21? Lionel Messi was showing similar signs of the ludicrous talent to come back then, but even he hadn’t – and still hasn’t – inspired his country to a World Cup. The season of Cristiano Ronaldo’s 22nd birthday at Manchester United (2006/07) was his year zero; the first time Portugal’s future megastar had broken the 20-goal barrier after harsh early knocks at Old Trafford. Mbappe has already achieved that feat for four seasons running.

In 2016/17, he helped Monaco relinquish PSG’s vice-like grip on the Ligue 1 title, rewriting Champions League records along the way and tormenting Pep Guardiola’s Manchester City in the last 16 – his first starts in the competition. The youngster scored in each round to the semi-finals, including both legs against the Premier League giants, and the inevitable talk of an upward move followed.

PSG eventually got their man to the tune of €180 million, despite Monaco agreeing a deal with Real Madrid first. And it continued: as France tasted World Cup glory in July 2018, Mbappe became the first teenager since Pele to score in the final, after a stunning two-goal display against Argentina in the last 16 helped his country get there. Last term, he confirmed his elite status with 39 goals and 17 assists in 43 appearances for PSG, scooping Ligue 1’s player of the season prize in the process.

The last two and a half years have indeed been something else. The next decade? It’s got his name on it.

To sum up Mbappe as both a player and man, one quote comes to mind. In May 2018, in a documentary about himself broadcast by French TV channel Canal+, the Parisian revealed the one thing that really winds him up. “It’s not, ‘You’re old enough or not old enough’,” he sighed. “If you’re good enough, you’re on the pitch. If you’re not good enough, you stay on the bench and watch. But don’t talk to me about age. Just talk to me about football and form.”

Mbappe may be 21, but he has rare intelligence and a wise head on his shoulders for one so young. A good entourage certainly helps; his dad Wilfried knows football inside out and is always by his side, while his mother Fayza is a former handball player and looks after everything around her son. Adopted brother Jires Kembo Ekoko had a good career as a professional in Saudi Arabia and Turkey after six years at Rennes in Ligue 1, and has been an invaluable advisor.

Another key figure in the family is former Cameroon player Patrick M’Boma, who is Wilfried’s best friend and has been there every step of the way for Kylian as well. The Mbappes have always known they had a gem in their family, but they wanted to put the homegrown prodigy on the right path. They had watched too many talents fall by the wayside after leaving France too early, and weren’t prepared to let their son make the same mistakes.

Instead of joining Monaco at 15, he could have gone anywhere in Europe. Every club wanted him. He had trained with Real Madrid and Chelsea, and top teams were trying everything to convince Wilfried and Fayza to let the golden boy sign for them. At that point, though, it was about the right move, not the biggest one. Nevertheless, drive and ambition have never been in short supply.

After last season, one in which PSG lost to Manchester United in the Champions League last 16 after winning 2-0 away in the first leg, Mbappe admitted he wanted more in Paris, too. Last May, he showed his hand.

“I’m coming to a second turning point in my career,” he explained. “I have discovered a lot of things here, and feel that maybe this is the time to have more responsibility. I hope that it will be at PSG – that would be great. Or maybe somewhere else for a new project.”

The crucial thing to understand about Mbappe is that anything he says is always pondered carefully; calculated and planned. He is far too intelligent to be a bad communicator. On that May night, the young Frenchman knew exactly what he was saying: he didn’t want to force a move, but the pressure on the club was real. Did their objectives match his?

Either way, the message was received loud and clear – Mbappe’s status has changed in Paris. He is the big man now, demonstrated both football-wise and commercially. The 21-year-old is at the front of everything, even if it doesn’t always go his way – like last month when he was visibly unhappy to be taken off by Thomas Tuchel in a 5-0 trouncing of Montpellier.

“We’re playing football, not tennis,” his German coach eye-rolled post-match. “Kylian is intelligent and has a good mentality, so we don’t need this sort of situation.” But if Mbappe wants to play every minute of every game for PSG – and he does – it’s merely because he wants to take this team to the top.

“Now I’m with PSG and 100 per cent with the club,” said Mbappe recently. “I want to help them grow this season, to win a lot of titles, so for me it’s not good to talk about [my future]. I think about the club because they helped me. I came here at 18. I was a talent, but not a superstar.

“Now I’m a superstar thanks to PSG and the French national team, but I have to stay calm and focused. After that, at the end of the season, we will see. But now I’m focused on my game.”

A superstar: that’s just what he is now. But despite all of the talent, all of that ambition and his fierce mentality, Mbappe is still the same boy from Bondy – the northern, working-class suburb of Paris where he grew up. The murals of him there – three of them – won’t let you forget it, either.

‘Love your dream and it will love you back,’ reads the first, featuring a junior Mbappe sleeping with a football in his green Bondy kit, dreaming of wearing the France No.10 shirt. The second depicts him in PSG kit with the slogan: ‘Bondy, city of possible’. The third, and most iconic, plays on the 1994 Nike poster of Eric Cantona and reads: ‘98 was a great year for French football. Kylian was born’.

And it’s true: 1998 was a great year for French football, but so too was 2018. 2020 could prove just as memorable with Mbappe in tow, and the decade to come is limitless in its possibilities.

The goals are all very clear. First, there is his dream of winning the Champions League with PSG; like the French club who haven’t gone beyond the quarter-finals since 2012-13, the young star is obsessed with making it happen.

Last season, in Neymar’s absence, Mbappe couldn’t haul his team beyond the first knockout round, after netting in the first leg at Old Trafford but missing big chances in both games. It was a harsh learning curve.

Then there’s the small matter of Euro 2020 with France. As World Cup holders and European Championship runners-up, Les Bleus and Mbappe are fancied to triumph at Wembley and repeat the nation’s 1998-2000 double of Zidane & Co. Four years ago, Mbappe watched his country’s heartbreaking loss to Portugal on television. This time he can make a difference, just as he did in Russia.

“What I wish for in 2020? A treble of Champions League, European Championship and the Olympics – that wouldn’t be bad,” he said in January, smiling. “That might seem unattainable for the time being, but I’m going to make sure I fulfil this dream... to keep on winning.”

And you can count on it. If one day you meet Wilfried Mbappe, ask him to show you the video he has of his son. In front of the camera, Kylian – aged four – effectively describes the career he is enjoying right now. It’s like he knew all along that it was his destiny, and the next 10 years might just bring him everything he has ever wanted. Just don’t talk to him about age.