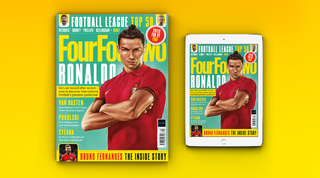 First a message from our editor, James Andrew.

Records are there to be broken, and Cristiano Ronaldo certainly knows a thing or two about breaking them. Having scooped major honours in England, Spain and Italy, as well as leading Portugal to Euro 2016 glory, he’s now on the brink of smashing the international scoring record.

Ronaldo is just short of Ali Daei’s milestone of 109 goals – we chart his rise from promising prospect to monstrous idol, chatting to the friends (and the odd foe) who have shared his unique journey.

Elsewhere, we present FFT’s annual look at the 50 best players in the Football League – voted for by you. As a Fulham fan not old enough to have seen the likes of Johnny Haynes or Gordon Davies, I wondered if I'd see a better player than Louis Saha at Craven Cottage. But then came Aleksandar Mitrovic, who has thrilled in SW6 to take his rightful place in our list. As for where? You’ll know soon.

Finally, in these uncertain times, it’s clear that there are more important things than football: your health and that of those around you must come first. It’s also clear that football is still so important, providing a sense of normality to so many fans. Hopefully, the game we all love will return strongly.

Soon, the world’s most relentless footballer will finally be able to call himself No.1. This is the story of how Cristiano Ronaldo moved to the brink of becoming the greatest international goalscorer.

Presenting the very best players below the Premier League in 2019-20. Let the arguments begin...

When Marco ruled the world

Like Ronaldo, Marco van Basten led his country to a first-ever trophy – via the greatest strike seen in a final. Euro 88 really didn’t turn out that bad for the Netherlands’ third-choice centre-forward...

Between the lines: Angelos Charisteas

Sixteen years ago, Greece headed to the Euros as 150/1 outsiders. In his own words, Angelos Charisteas explains how they shocked the world – and consigned Ronaldo to a painful defeat.

The rise and fall of Michel Platini

Platini’s dreams of a European Championship across the continent this summer are in tatters, prolonging his post-UEFA shame. It wasn’t always like this: The King was once planet football’s finest player when inspiring France to glory at Euro 84. But it’s a long way down from the top...

Inside the struggle for Steaua

For two decades, legal wrangling in Bucharest has led to a bitter identity war which still isn’t over. FFT heads to Romania to dig deep on the thorny issue driving a wedge through its capital city.

The rise of Bruno Fernandes

A plucky disagreement with his dad changed the course of his life forever, but such burning ambition has already made Bruno an Old Trafford hero. This is his remarkable story so far.

Les Parisiens' 2007-08 started with optimism, only to become a woeful campaign that went down to the wire. A star-studded side survived by a whisker – but on-field matters were only half the battle.

You Ask The Questions: Lukas Podolski

Andy Cole discusses his dramatic switch from Newcastle to Manchester United, Steven Pienaar reveals why he signed for Spurs over Chelsea, Rachel Yankey recalls having to masquerade as a lad called Ray to play in a boys’ team, and Micky Quinn explains why he was known as ‘Kevin Dalglish’.