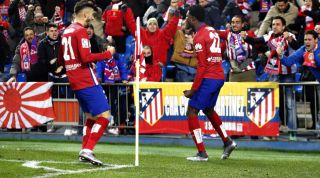 It might be because La Liga Loca is full of the joie de vivre and promise that another year brings, or the simple fact that every match in La Liga this weekend had something to chew over. The less glamorous Getafe might be ending that run on Monday night against Sporting, though.

Atlético sit proudly at the top despite being pushed all the way by the team at the bottom, while Valencia and Real Madrid sprinkled some stardust to wrap up Sunday night. Barça? Let’s just say that LLL is hovering over the mini-crisis button, just for kicks. And yes, the blog actually has one of those.

Wonderful. While Real Madrid continue to dither around, despite some fire in the belly at Mestalla on Sunday, Atlético Madrid are scooping up the peanut shells of their rivals’ slip-ups to turn them into engine fuel. Or something like that.

Diego Simeone may continue to struggle picking his favoured forward lineup with around 130,435 combinations possible from six different players – Antoine Griezmann, Jackson Martínez, Luciano Vietto, Angel Correa, Fernando Torres and Thomas Partey. Pretty much all of them have been thrown into the mix at some point, and seem to be getting the job done.

It was a combination of substitutes that won three late points with two goals against Rayo on Wednesday, and it was the same on Saturday when highly impressive youth-teamer Thomas filled the Raúl García role by digging the Rojiblancos out of another hole.

While the forwards are still to click, the backline is as brilliant as ever: the 1-0 win over Levante in the Vicente Calderón was their 11th clean sheet of the season. After conceding just eight goals in 18 games, Atlético are top of the table with a two-point gap over Barcelona, who have a game in hand.

Great Caesar’s ghost, Barcelona are happy to give stuff away these days. They’ve now dropped six points in four games, showing once again that the Club World Cup might be acting as a wonky car GPS – a Royston Drenthe to Barça’s title defence by sending the team to the left into a police car instead of straight on, leaving everyone trailing behind in the manner of James Rodríguez this week.

The latest act of kindness was in the Catalan derby against a very feisty Espanyol team that didn’t quite have the porridge to win, but certainly made Barça pay for sluggishness. “A fair result for what we were able to produce,” noted Luis Enrique after the match. “Perhaps we picked up a point or lost two, let’s see.”

Despite some grumblings about the pitch and Espanyol’s brusqueness, there have been few complaints in the culé press about the defeat. Joan Vehils opined in Sport that “at no point could Barcelona find that fifth gear”.

In stark contrast to Atlético Madrid, who have been able to pick up six late points in two games using reinforcements from the bench, Barcelona have been stuck with the same gameplan and faces again and again and again. At least that will change for the second of three quick clashes with Espanyol, with a transfer ban lifted and the likes of Arda Turan let loose at last.

A quick point on that one: if Barça don’t recreate Sly Stallone being removed from cryo-sleep in Demolition Man with Turan, then the club is missing a trick.

Effort rather than result good enough for Real Madrid

Rafa Benítez is looking for the perfect combination from his team – the victory and the gutsy, battling performance with a touch of class. The latter was very much evident in Mestalla, although the result ended up a 2-2 draw, it could have been a heck of a lot worse had Alvaro Negredo not had his effort saved in the final seconds by the impressive Keylor Navas. It’s no wonder that Benítez was suggesting the team’s efforts deserved praise and not criticism for once.

Leaving aside what the result means for Gary Neville, Rafa and the title race (the answers are ‘probably good’, ‘OK’ and ‘not much’) the main point to be taken from Sunday’s game was that it was an absolute fun-filled humdinger.

Villarreal have snuck up on the top three after five league wins in a row under the magnificent Marcelino. The captain of the Yellow Submarine was certainly suffering a tad in Riazor on Sunday evening, when his team were given an injury-time penalty with the scores at 1-1.

However, his player Bruno is the bee’s knees these days and popped the spot-kick home to ensured he’d netted the team’s last three goals and delivered six points in the process. “A draw would have been fairer,” said the magnanimous Madrigal boss whose team are just one point behind Real Madrid.

Pepe Mel really didn’t need that result. Losing at home is never great at the best of times, but especially not for a team that hasn’t won in its own stadium for seven games now. Being beaten by Eibar isn’t exactly a good move. Being beaten 4-0 by Eibar is just terrible.

That’s why much of the Betis massif were calling for Pepe’s head for the second time in his managerial career, and the ex-West Brom boss understands full well that he’s on borrowed time. “I understand why they booed me, as we played horrendously badly,” he sighed.

However, despite the pressure on his job, it looks like the Betis coach will be in charge for the midweek Copa del Rey clash in the Benito Villamarín: the small matter of a game against Sevilla. In a way that might be a lifeline for the Betis boss, should all go well at home for once.

A good day for some mighty minnows

Before signing off, it’s time for the ‘good job’ participation medals. Starting down south, Málaga appear to have surged from a manager-in-danger institutional in-fight, to being an Atlético Madrid-style cruise machine. The weekend’s home win over the previously mighty Celta Vigo was the side’s fourth straight Primera victory in a row.

Granada pulled out a win over Sevilla to help put away the sacking hat hovering over the very likeable José Ramon Sandoval for another couple of weeks. The 2-1 win also included yet another world-class strike from the tremendously exciting Adalberto Peñaranda, the team’s young Venezuelan striker.

A pat on the back for Las Palmas too for grabbing a point in San Mamés against Athletic Bilbao. And last but certainly not least, a standing ovation for Eibar, for turning over Betis in Seville to put the Basque side into eighth and above an awful lot of big hitters in La Liga. Not bad for a team that was relegated last season.