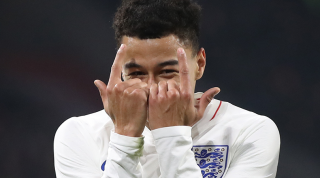 The 25-year-old enjoyed a breakthrough season as a game-changing No.10 for Manchester United, and also scored the winner as England triumphed in Amsterdam for the first time since 1969.

Each of Lingard's strikes have been followed by one of his famous choreographed goal celebrations, endearing him to fans of club and country on social media. However, he admits he will probably opt for something more straightforward should he score at Moscow's Luzhniki Stadium on July 15.

Speaking exclusively in the July 2018 issue of FourFourTwo magazine, available now, Lingard says: “I’ll be taking everything off! None of my celebrations are planned, they just happen and it depends on how the game is going. If you’re two or three up I think you can enjoy yourself a bit more.

“You have to choose the right celebration based on the state of the match. If I score in the World Cup final, it'll be passionate. I'll be taking my shirt off and then running around like an absolute lunatic.”

England continued their preparations for the tournament with a 2-1 victory over Nigeria at Wembley. Expectations at home are not huge for a squad which is the third-youngest in Three Lions World Cup history, but Lingard likes manager Gareth Southgate’s approach and believes the team can impress.

“As a group there’s a lot of expectation – we believe we can go far,” he says. “The manager is giving us the freedom to go out and express ourselves on the pitch and play without any pressure.

“That has to be our mindset. We shouldn’t worry about anything off the pitch. We’re going to be mentally and tactically prepared to take on the test, and have a good mix of youth and experience. This is a tightly knit group, so I think our team spirit and togetherness will pull us through.”

Read the full interview with Jesse Lingard in the July 2018 issue of FourFourTwo magazine. A ‘Stars of the 2018 World Cup’ special, we also chat to world champion Mats Hummels, South Korea’s Son Heung-min, Panama legend Roman Torres, Brazil forward Roberto Firmino and his boss Tite. We also profile some of the young stars hoping to make their mark at Russia 2018, hear how a hotel fire helped Joan Capdevila inspire Spain to 2010 World Cup glory, celebrate the story of Jamaica’s Reggae Boyz at France 98, and reveal the World’s Cup biggest villains. Plus, Nigel de Jong gives us his take on ‘that’ tackle against Xabi Alonso in One-on-One. Order a copy today, and then become a subscriber!