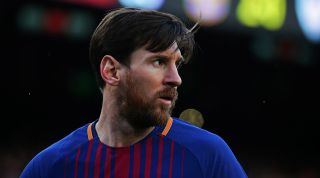 There isn’t much that can send Leo Messi into a tizz: the sight of Cristiano Ronaldo winning the World Cup, or the idea of playing for Arsenal maybe.

A few years ago, though, the 30-year-old admitted to throwing up regularly during games – a concerning issue that didn't have an obvious cause.

However, Messi has now admitted that very simple changes to his diet have stopped the problem – namely, cutting out the sugary stuff.

"I ate badly for many years: chocolates, fizzy drinks, and everything,” the Barcelona star told La Cornisa TV.

"That's what made me throw up during games. Now I look after myself better. I eat fish, meat, salads. Everything is organised and taken care of."

Barcelona are on course for the Treble in 2017/18, after which Messi will hope win his first ever World Cup with Argentina. All he has to do is stay away from the Dolly Mixture...