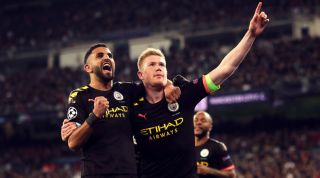 It was Jose Mourinho that popularised the phrase “football heritage”. It was Zinedine Zidane that gave it weight.

In three successive seasons, he proved that history floats. That the name of Real Madrid is too grand not to succeed. That heritage matters; that if all else fails, an established football club triumphs over a newer name, with or without a tactical template.

Building a European superpower is more difficult than it looks - just ask PSG. Really, only Roman Abramovich at Chelsea has managed to take a club who'd never won the Champions League and make them look capable of regularly challenging for it in a hyper-competitive era. Arsène Wenger couldn't do it. Tottenham are trying. And let's face it - Manchester City have never really come close, despite their recent dominance of the English game.

The elite, after all, is an exclusive club. It's not one that they want burgeoning empires to join either: as much as anything, FFP is about preventing the likes of City and PSG from challenging against the Juves, Barcas and Bayerns. The aristocracy protects its own.

Every time City step onto a pitch, that's what they're fighting. Not just the next 90 minutes, but the last 65 years. Champions League-winning clubs, by and large, develop such hardened mentalities over decades of success. They believe they belong at the top. Their identities become woven around the famous looping handles of the trophy until they're synonymous with the thing.

Benjamin Mendy exclusive: "When I first met Guardiola, he walked over to shake my hand but just gave me a little kiss"

And that's why last night was arguably the greatest European night City has witnessed – certainly, the best since their regular European sojourns in the 1970s.

Sweeping aside Schalke 7-0 at this stage last season was good, but this was the start, the real start, of City establishing themselves as a genuine giant in European football - and not just a billionaire's plaything, putting on their very best Barcelona impression.

For the first time in a long time, it painted Pep Guardiola as David rather than Goliath. This is a role he isn't used to: he's so infrequently the underdog that when he makes such drastic tactical tweaks as last night - such as dropping Silva, Agüero and Sterling - he's seen more like a god testing his omnipotence, than a mere mortal out-thinking his opposite number.

Yet City's performance in the Bernebeu was measured and mature. Tactically refreshing. It relied on give and take. Compared to the manner in which they free-wheeled 198 points over two seasons, it was so un-City.

At the heart of it, an unlikely hero. Ilkay Gundogan is so often used at the base of City's midfield, but here he was as a No.8, recycling possession and covering the areas of pitch that Rodri couldn't reach. He was a metronome in midfield for Guardiola's side, not always looking for the vertical pass like he does in the Premier League, but to intercept and wait for opportunities rather than force them. He was happy not to steal the limelight. He was calm in possession and confident out of it. In comparison to the slapdash effort he put in against Leicester, he was magnificent.

Gundogan put in a shift that David Silva never has for City in Europe - it was a performance of patience that only a natural midfielder could manage. And on the other side of Rodri, it was a facet of Kevin De Bruyne we haven't seen for so long. The Belgian stretched his legs, took Real's midfielders on. He wasn't just there to whip balls into the box but to calculate attacks. He showed an understanding of the game that he's rarely been tested to do domestically.

Manchester City have so often crumbled in battle. They succumbed to a classic Anfield atmosphere two years ago, drowned in the drama of an eight-goal tie last season against Spurs. But last night was assured. Composed and confident of their belonging in Europe's elite - even after going a goal down.

Guardiola's men pulled out a performance that we've seen Real Madrid conjure countless times. We've seen it from Bayern, from Liverpool, from Juventus. But never from Man City. A club fighting the aristocracy, on and off and pitch.

It's an image that could possibly transform a football club: Kevin De Bruyne steely-eyed after scoring his penalty, pointing up into the blue corner of the Bernabeu sky, where 3,000 Manchester City fans celebrate. The captain of a football club conquering the Bernabeu.

For tonight, at least, they made history of their own.

QUIZ Can you name the line-ups from Real Madrid vs Manchester City in 2016?

GUIDE Champions League live stream best VPN: how to watch from anywhere in the world