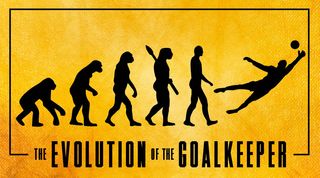 Just as goalkeepers have evolved, so too have speakers. They’ve changed in shape, size, sound and functionality. The next step in this process is Dynaudio Music, a speaker with a truly expanded skillset. As well as playing music – which it does masterfully – it creates personalised playlists, adapts its sound depending on where in a room it’s positioned, and ensures essential musical details are always clear, even when the room is noisy and the speaker volume is low.

Like today’s multi-skilled goalies, Music is a speaker of many talents, built to excel not just at one task but a whole array of them. To celebrate the launch of this intelligent wireless speaker range, Dynaudio asked us to investigate the path that’s led us here: to identify the sport’s pioneers and how they changed the game, plotting the evolution of the role over generations...

Time was, going in goal was conclusive evidence of social inadequacy: the least popular position reserved for the playground’s least popular person. But that’s all starting to change – thanks, in part, to keepers like Manuel Neuer. The 31-year-old’s barnstorming performances as a sweeper-keeper for Bayern Munich and Germany have eroded some of the mystique that surrounded his position and changed the way keepers are both coached and perceived.

Before Neuer, goalkeepers such as Denmark’s Peter Schmeichel were redefining the possible in terms of shot-stopping. But in a game in which every specialist is increasingly required to be a generalist, keepers who are simply shot-stoppers are fast becoming as rare as full-backs who only tackle and strikers who do nothing but score in the six-yard box. Here's the backstory of how we got to this point.

Leigh Richmond Roose, the flamboyant Welsh international who was one of the biggest stars in British football a century ago, believed goalkeepers were strange, nomadic figures, necessarily different from other men. In 1906, in The Book Of Football annual, Roose wrote: “A good goalkeeper, like a poet, is born not made. To prove a successful goalkeeper, a man must be one of those destined by nature to be ‘on his own’, as the resources for reliably filling the post are entirely in himself, and unless he wishes to be purely imitative, like the silkworm must produce his materials from himself.”

Being the only player allowed to handle the ball in a game officially known as football has given these self-proclaimed silkworms licence for some eccentric exhibitionism. In 1916, William Foulkes, the gargantuan Chelsea, England and Sheffield United keeper, laughingly recalled picking up one combative striker, rubbing his nose in the mud and, with one hand, passing him to a trainer. Such antics make René Higuita’s scorpion kick, Sepp Maier’s comic duck-chase and John Burridge’s Superman costume – worn under his Wolves kit to win £100 from Kevin Keegan – look decidedly low-key.

Burridge was reinforcing, albeit ham-fistedly, a point made by Vladimir Nabokov, the Russian novelist and student goalkeeper, who envisaged himself between the sticks as “a fabulous exotic being in an English footballer’s disguise.” The aura around this exotic, eccentric, melodramatic art – and the scope the role gives for players to express or disguise their personality – may explain why goalkeeping remains the game’s most intellectual position, attracting novelists (Albert Camus), priests (Pope John Paul II), scientists (Niels Bohr) and revolutionaries (Che Guevara).

Alone in the woods

Eccentricity and exoticism are useful distractions in a profession blighted by an uncertainty that is almost existential. In French playgrounds, when teams change goalkeepers, they say “It's your turn to go in the middle of the woods.” (The last six words sound more profound in French: “au milieu des bois.”) Camus used this idiom once, defending a goalkeeper playing for his beloved Racing by saying: “It’s when you’re in the middle of the woods you realise how difficult it is.”

For some, the psychic burden becomes unbearable. Think of poor Peter Bonetti, becoming a postman on the Isle of Mull after being blamed for England’s 3-2 defeat to West Germany in the 1970 World Cup quarter-final.

Or Brazilian keeper Moacyr Barbosa, regarded as one of the best in the world until Uruguay put two goals past him in the de facto World Cup final, in the Maracana in 1950. Once pilloried by a shopper as “the man who made Brazil cry”, Barbosa tried to exorcise his demons by holding a very special barbecue in 1963. The wood he burned to entertain his guests turned out to be the goalposts from the Maracana on that fateful afternoon, rendered obsolete by a change in FIFA regulations.

All this sturm, drang and eccentricity has given the goalkeeper’s role a romantic, almost philosophic aura, reflected in the title of Austrian writer Peter Handke’s novel The Goalie’s Anxiety At The Penalty Kick. The price to be paid for such mystique was a certain alienation from the rest of the industry, an attitude captured in the title of Brian Glanville’s story Goalkeepers Are Crazy.

Not just crazy but invisible, their presence not even acknowledged when formations are described. As Barcelona keeper Jasper Cillessen admits: “To put it in very black and white terms, you used to be a goalkeeper because you weren’t good enough to play outfield. Now you need to play some football.” To call what Neuer does “some football” is an understatement. Germany’s goalkeeping coach Andreas Köpke has said of him: “I’ve never seen a better sweeper, apart from maybe Franz Beckenbauer.”

So what changed? The process of integrating keepers tactically into the team can be traced back to the early 1950s when Gusztáv Sebes created a fluid Hungarian national side that played a revolutionary formation – within a hair’s breadth of 4-2-4 – in which players routinely rotated positions and centre-forward Nándor Hidegkuti kept disappearing towards the halfway line.

Initially, Gyula Grosics became a pioneering keeper-sweeper out of necessity, not choice, explaining: “The attacking game-plan provided more opportunities for the opposition to counter-attack when they got possession.

“There was space behind our defence to be exploited and I had to act as a kind of extra sweeper, outside my area, trying to reach the through ball before opponents.”

As keeping possession became crucial when countering the counter, Grosics rolled the ball out because it was more accurate than hoofing it up the pitch. This ploy proved so successful that Ferenc Puskás and Hidegkuti began drifting back to pick up a throw, further confounding opponents.

It took a while for such tactics to spread. In 1997, as Barnsley’s German keeper Ronald Reng recalls in his book The Keeper of Dreams, the mere act of rolling the ball to a full-back was regarded as so troublingly subversive that a coach rushed onto the pitch at half-time and stood on the exact spot near the halfway line towards which the ball should be kicked.

Rinus Michels was quicker to learn from Hungary’s inspirational example. Coaching the Netherlands in the 1974 World Cup, he decided that Jan Jongbloed’s quality as an extra defender, 20 yards from goal with his feet, was worth more to his team’s Total Football than Jan van Beveren’s spectacular shot-stopping. Although there was nothing very sophisticated about Jongbloed’s brief – his mission was to get the ball first and clear it – his selection marked something of a watershed. The coach of one of history's most talented sides had indicated, with this selection, that for a goalkeeper sweeping was more important than keeping.

Johan Cruyff followed Michels’ lead as Ajax coach in 1985/86, advising keeper Stanley Menzo: “Go out and make mistakes.” That message reflected the recognition that this style of keeping came with risks and rewards. The risks soon became apparent when Louis van Gaal succeeded Cruyff. His impatience with Menzo’s blunders led him to promote Edwin van der Sar, who was accomplished enough with the ball at his feet to hold his own in any part of the team but less gung-ho than Menzo when rushing out of his area.

Yet Cruyff didn't give up. The idea of having one player in your side who just stopped shots offended his sense of logic. The ideal was to have 11 footballers, one of whom could also make great saves. He was even more adventurous than Michels, valuing Menzo more for his contribution to attack than for his quality in goal.

In 1992, when Cruyff won the European Cup as Barcelona coach, a promising 10-year-old called Victor Valdés joined the club’s youth system. Although Van Gaal spent four years managing Barça, Cruyff was still the club’s football philosopher, in or out of residence. Valdés was the perfect goalkeeper for the fast circulation football the club developed under his former players Frank Rijkaard and Guardiola. Between 2009 and 2011, Valdés didn’t make that many saves because his team were so dominant he usually didn’t need to. Valdés would, of course, be kept much busier during his spell between the sticks at Middlesbrough.

Building from the back

Traditionally, when a keeper’s team have the ball, their job is to position themselves to avert any potential danger. Yet the sweeper-keeper’s positioning reflected the need to spot the danger – and the opportunity. As Packie Bonner noted in a recent edition of UEFA’s The Technician, this kind of goalkeeper had become “an integral team member with an important role to play in building from the back – not just playing short passes with a view to initiating possession plays, but developing to mix this with a more direct supply to the front and the ability to launch counter-attacks.”

Old-school specialist coaching, which focuses on the keeper’s work in a particular part of the pitch, has effectively been rendered obsolete. Keepers like Neuer have to read the whole game, play the most productive pass or throw and act as a third full-back or centre-back.

This game comes naturally to Neuer, who has trained with outfield players since his days in Schalke’s youth team. After one impressive display by the youngster, awestruck young fans demanded autographs, assuming he was their new star signing, only to be told: “I am Manuel Neuer, your third-choice goalkeeper.”

In a century of minding the net, the trend has been away from the splendid isolation of Roose, with his self-reliant silkworms, and towards a more dynamic role that integrates the goalkeeper, tactically and psychologically, into the team.

Nostalgists may not welcome this change, yet, in Roose’s terms, Neuer is certainly no imitator. The Welshman railed against “those armchair critics who tell a goalkeeper what he should do and where he should stand” in his 1906 article. For Roose, who won 24 caps, keepers should bring “the spice of originality” to their work and, when rushing out with the aim of kicking, “don’t hold back but kick with a capital K.”

Neuer fulfils both of those criteria. And with a new generation of sweeper-keepers beginning to follow his example, coaches and pundits may soon begin to prefix their 4-3-3s, 4-4-2s and 4-2-3-1s with a 1.