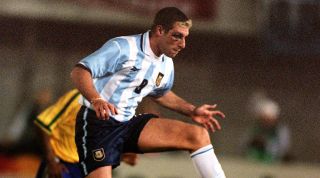 Injury time. South America's footballer of the year, 25-year-old striker Martin Palermo, places the ball on the penalty spot, puffs out his cheeks and prepares to earn his place in football folklore. Not to mention the Guinness World Records.

It’s the group stage of Copa America 1999. In Argentina's opener, a 3-1 win over Ecuador, Palermo had scored twice. Now it’s the second match; Argentina vs Colombia. Whichever side wins will likely top the group – and thereby avoid Brazil in the quarter-finals.

With five minutes played, Argentina escape down the left wing. The ball is crossed to the back post. Palermo jumps, preparing for a volley. The angle is acute, and there is no way he can score. But Colombian defender Alexander Viveros panics and punches the ball clear. Penalty to Argentina!

Palermo spots up the ball. He cuts a striking figure with his muscular stride, white boots and boy band haircut. Opting for power over finesse, his left-footed shot smacks the crossbar and balloons behind the goal.

On the sideline, Argentina manager Marcelo Bielsa is unimpressed. Palermo jogs away stoically. The match is young... there will be other chances.

It turns out to be the prelude of a very busy night for referee Ubaldo Aquino.

With 10 minutes on the clock, Colombia's Arley Betancourt bursts into the Argentina box. Nelson Vivas leans across and Betancourt falls to the ground. Penalty to Colombia!

After some dispute with Hamilton Ricard, Ivan Cordoba will take the kick. Argentina keeper German Burgos bobs on his line, pointing to where he thinks the ball will go. But his powers of clairvoyance prove no better than those of his predecessor in the Argentine goal. (That summer, Seventh Day Adventist Carlos Roa had hung up his gloves, believing the world was about to end.)

Cordoba wheels away in celebration. He pulls up his shirt to reveal a vest with the No.2 printed on it and points to the sky. The match is being played close to the fifth anniversary of the murder of Colombian defender Andres Escobar.

Two minutes into the second half, Colombia cross the ball into the box. Ricard performs a star jump before collapsing spectacularly. Argentine captain Ayala is closest to him, but if anything he’s not marking closely enough. Penalty to Colombia!

Bielsa is unamused. This time it’s Ricard who steps up. His tame penalty is easily saved.

With 20 minutes left, Colombia still lead. They also have a man advantage. Javier Zanetti has taken emergency action having watched a Colombia player glide past him, putting his elbow into the face of Rubiel Quintana. Red card! Zanetti politely shakes the referee’s hand before exiting the pitch.

Fifteen to play. Young Juan Roman Riquelme seeks out club-mate Palermo, lurking at the far post. Palermo meets the ball with his head; Viveros, in close attendance again, decides to intercept with his hand. Penalty to Argentina!

Determined to make amends, Palermo grabs the ball, unmoved by any dissent from his team-mates. Watching his long run up, Argentine TV anchor Marcelo Araujo pleads to a higher power. "Vamos Martin, vamos…"

The ball sails high over the crossbar. Palermo grabs his shorts, torturously pulling them into a v-shape towards his chest. Despairingly, Araujo asks viewers at home: "No, by God, please, how can it be?”

In the dugout, Bielsa can take no more. Referee Aquino sends him to the stands.

Immediately Colombia attack, winning a corner. Palermo, head still spinning, stations himself to defend the near post. It’s a scuffer. Palermo draws back his left foot to hammer clear but misses his kick. He turns around just in time to see the ball drop to Colombia's Edwin Congo, who – with his first touch, on as sub – doubles Los Cafeteros’ lead.

Minutes from full-time, another substitute – this time Johnnier Montano – makes it 3-0 to Colombia. This is going well.

At this point, it would be tempting to think Martin Palermo's night had reached rock bottom. Unfortunately, however, there were further depths to plumb.

With 90 minutes up, the striker intercepts a slack square pass. Cutting inside Cordoba, he prepares to run at the last defender. Cordoba, recovering, chases after him. There is faint contact. Palermo tumbles to the floor, then looks up expectantly. For a fifth time, the referee points to the spot. Penalty to Argentina!

Incredibly, Palermo will again take the kick. Retrospectively, he will admit: "I was about to explode. My concentration was almost zero. I felt alone like a bad dog." He does at least hit the target this time, but goalkeeper Miguel Calero easily parries the shot away.

Taken off penalties, Palermo did manage a goal in Argentina's final group game against Uruguay – but the Albiceleste were then eliminated by eventual winners Brazil. The backlash from the press was severe; Palermo now held the world record for the most penalties missed by one player in an international game. And so, despite winning multiple titles with Boca Juniors, he was sentenced to a decade in the international wilderness.

Remarkably, however, that was not the end.

In 2009, at the end of Argentina’s dismal World Cup qualifying campaign, manager Diego Maradona recalled Palermo to his squad. He made his comeback with a 30-minute cameo in defeat to Paraguay, then scored twice in a friendly against Ghana.

Argentina had to beat Peru in their qualifying final game to stay in contention for World Cup 2010. In torrential rain, Los Incas equalised in the 90th minute. Desperately, Argentina launched one last attack. The ball skidded across the box and found its way to Argentina’s 35-year-old substitute. This time, Martin Palermo made no mistake and prodded home, snatching last-gasp victory.

QUIZ! Can you name the 60 most expensive player transfers ever?