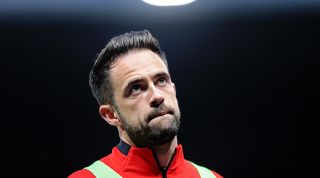 Kaboul initially joined Tottenham from Auxerre in 2007, but his failure to impress Juande Ramos meant he was on the move again the following summer. Harry Redknapp was happy to take him to Portsmouth, with the centre-back becoming a fans' favourite at Fratton Park.

His performances tempted Spurs into a reconciliation 18 months later, with Redknapp – by now in charge at the Lane and covering his new club's embarrassment by describing the Frenchman as a "late developer" – happy to fork out another £9.5m for the centre-back. Kaboul went on to make 89 league appearances before joining Sunderland in 2015.

Born in Jersey, Le Saux spent two years in Chelsea's youth setup before signing his first professional contract in 1989. The full-back was frustrated at constantly being substituted by manager Ian Porterfield, though, and packed off to Blackburn Rovers for £700,000 after throwing his shirt on the floor in a match against Southampton.

While Le Saux was ever-present throughout Blackburn's Premier League-winning campaign in 1994/95, controversy followed a season later as the England international fought with team-mate David Batty during a Champions League tie. Chelsea then decided to bring him back to London in 1997, making Le Saux the most expensive defender in the English game when they paid £5m for his services.

A graduate of Barcelona's La Masia academy, Pique joined Manchester United before the Catalan club could offer him a professional deal. "United offered me the special chance of being in daily contact with professional players,” the centre-back told FFT in 2015. “At Barcelona the philosophy was different then, and foreign signings were given more opportunities than the youth team."

Pique spent four years at Old Trafford but made only 12 league appearances as he struggled to break into the starting XI. Realising that he might never usurp Rio Ferdinand or Nemanja Vidic, he returned to Barcelona in 2008 in a deal worth £5m.

The stopper has thrived ever since, establishing himself as one of the world's foremost defenders, winning eight La Liga titles and two Champions Leagues plus a World Cup and European Champiponship with Spain. Eleven years on, £5m seems pretty worth it.

Defoe has represented five Premier League clubs in his career, making just over half of his top-flight appearances in north London with Tottenham. The striker, who first moved to White Hart Lane for £7m in 2004, scored 43 goals in 139 matches for Spurs before joining Portsmouth four years later.

Defoe was even more prolific on the south coast, netting almost a goal a game in the Premier League, but was back at Tottenham just 12 months later in a deal worth £15.75m – more than double what Spurs had sold him for just a year earlier.

While Reus has had plenty of chances to follow Mario Gotze, Robert Lewandowski, Ilkay Gundogan and Mats Hummels through the exit in recent years, he remains a Borussia Dortmund player four years after returning to the club for £15m.

The Germany international did leave the club at one stage of his career, though, joining Rot Weiss Ahlen aged 17 in 2006. He then spent three years at Borussia Monchengladbach, where he established himself as one of the Bundesliga's most creative and exciting young players. Dortmund wasted little time in snapping him up in 2012, and Reus – still BVB's talisman – has shown no signs of wanting to depart again just yet.

Crouch is a unique player on this list, having been re-signed by two clubs for more money than he was sold for. A youth player at Tottenham in the late 1990s, he moved to QPR for £72,000 in 2000 without ever making a single appearance for Spurs.

Spells with Portsmouth, Aston Villa, Norwich, Southampton and Liverpool followed, before Crouch returned to White Hart Lane in 2009, signing a five-year deal with his boyhood club for a fee of £10m. The 6ft 7in frontman may have only scored 12 goals in 73 Premier League appearances for Tottenham, but he will always be fondly remembered for the strike against Manchester City that secured Spurs' place in the Champions League.

Crouch's Portsmouth career began in 2001 when the south coast club paid £1.5 million to QPR, who had just been relegated to the second division. He didn't last long in Hampshire, though, with his 18 goals earning a £15m switch to Aston Villa a year later. The striker was back at Pompey in 2008, however, in a deal worth twice as much as they'd originally sold him for. Crouch scored 11 goals in 38 league appearances before departing... for Tottenham, of course.

When Alan Shearer shot to prominence at Southampton, it was a surprise to many when they discovered he was a born and bred Geordie from the far end of the country. The future England international, who remains the Premier League's all-time top scorer with 260 goals, would have stayed in the north-east if he'd had his way, but boyhood heroes Newcastle United were unimpressed at his performance in a trial game. This may have been because they stuck him in goal.

The Magpies' loss was Southampton's gain, with Shearer netting 43 goals in 158 appearances. From there he moved to Blackburn Rovers, helping the Lancashire side make history by securing their first league title in over 80 years.

After a successful Euro 96, Shearer was on the move again, chased by Manchester United and clubs on the continent. But once he heard Newcastle were interested, there would only be one destination. The Magpies paid a world-record £15m for him and were rewarded with 206 goals in 404 games.

A £1.5m pick-up from Slovakian outfit Kosic, Matic joined Chelsea in 2009 but struggled to break through into the first XI. A loan move to Vitesse brought valuable game time, but Carlo Ancelotti deemed him surplus to requirements in 2011, selling the midfielder to Benfica as part of the deal that took David Luiz in the other direction.

Matic excelled in Portugal as manager Jorge Jesus converted him from a playmaker into a defensive screen. Chelsea recognised their error in 2014 and brought him back to Stamford Bridge for £22.95m, with Matic becoming an essential member of the Blues' title-winning team in 2014/15.

Anelka debuted at PSG in 1996, and it wasn't long before Europe's elite (PSG rarely even won Ligue 1 in those days, kids) were being linked with the talented French forward. Arsenal parted with £500,000 to bring him to Highbury; two years later, Real Madrid, armed with £22.3 million, came calling.

Anelka struggled to settle in Spain: it took him almost seven months to score his first La Liga goal, while a falling-out with manager Vicente del Bosque led to him being suspended without pay for 45 days. "They treat me like a dog," Anelka wailed. "I'm alone against everyone." Well, he wasn't nicknamed Le Sulk for nothing.

Anelka soon went on the hunt for another club and ended up full-circling back to PSG, who also paid around £22m for his services in 2000. Ten league goals in 39 appearances didn't appease sceptical Parisians, though, and the striker was soon heading for the exit again – first on loan to Liverpool and then on a permanent deal to Manchester City. By the end of Anelka's career, 12 clubs – including Chelsea, Fenerbahce, Shanghai Shenhua and Bolton Wanderers – had collectively spent almost £110m on his signature. But nobody lost quite as much as his first club.

Like Pique, Fabregas also began his youth career at Barcelona but departed for England at an early age. Arsenal were the beneficiaries on this occasion, with the Spaniard becoming the Gunners' youngest ever first-team player in 2003 and going on to wear the armband as club captain a few years later.

A return to Barça was always in the midfielder's mind, however, and Fabregas eventually sealed a move back home for £27m in 2011. Things didn't really work out at the Camp Nou, though, and the then 27-year-old returned to the Premier League three years later, this time with Chelsea.

In Pogba's case, impatience was a virtue. Tired of his lack of opportunities under Sir Alex Ferguson – and fair enough, when Rafael was occasionally preferred in midfield – the Frenchman left Old Trafford on a free transfer to Juventus in summer 2012. "I don't think he showed us any respect at all, to be honest," harrumped Fergie.

But the move was Pogba's (and his agent, Mino Raiola's) considerable gain. Gradually he asserted himself as one of the finest young midfielders in the world, to the point where United shelled out a world-record £89m to bring him back 'home' in August 2016. Raiola earned an eye-popping £41m from the deal: a £23m cut of the transfer fee, plus five instalments from United totalling £16.39m across Pogba's five-year contract. Nice work if you can get it.

BARGAINS Juventus' list of free transfers since 2009 is... enviable

QUIZ! How many of Arsenal's 50 biggest transfers can you name?