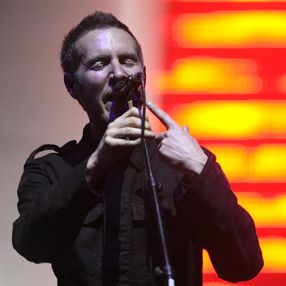 “My dad was born a Neapolitan, so that basically means you’re born a Napoli fan; you don’t get a say in the matter!”

Robert Del Naja is an international ambassador for the Bristol underground scene, but his father’s ties with Naples explain his staunch support of the Partenopei.

Better known as 3D – one half of trip-hop duo Massive Attack – Robert was born in 1966 and raised in Brighton, after his father moved over to the UK in the early '60s. Despite not being able to watch his beloved Napoli in the flesh until his late teens, he satisfied his calcio cravings at Ashton Gate in the late '70s.

“I was taken to see Bristol City as a kid, when they were in the old First Division – Liverpool at home,” reminisces Del Naja.

“The first time I really felt compelled to go to Naples was when we signed Diego Maradona in 1984. Signings don’t come more exciting than that, but I used to love watching Careca as well. He was a real classic No.9 – great in the air, quick on his feet and a brilliant shot.”

Arriving from Barcelona for a world record fee, Maradona would go on to become a god among the Napoli faithful, as he led the side to their first ever league title in 1986/87 and a second in 1989/90. Unfortunately, in the years to follow, the fortunes of Maradona and Napoli went south – just as Massive Attack were rising to global fame.

“The first opportunity I got to go out there was at the start of the 1990 season," Del Naja recalls.

“We were playing Inter and I remember how much I was looking forward to the occasion. On the way over there I checked the news and Maradona was done for cocaine – the day before the game! I was absolutely gutted.”

THE FALL AND RISE OF NAPOLI

A 15-month ban eventually meant that Naples’ adopted son would never play for the club again, and set in motion a chain of events that culminated in the club's relegation to Serie B in 1998. Despite gaining promotion back into the top tier at the first time of asking, they were unable to stabilise and dropped back down.

In 2004 the club declared bankruptcy, after accruing debts of up to €70 million, and were moved to Serie C1 by the Italian Football Federation. Despite this, attendances at the San Paolo stadium were still sky-high; Napoli’s average attendance dwarfed many of those in Serie A that year. Among the fans keeping the faith was Del Naja.

“I went to the first game in Serie C1 against AS Cittadella, and there were something like 60,000 people in the stadium, which was ridiculous! Even when we were in Serie B, in that crazy season where we got promoted with Juventus and Genoa, we still had the highest attendance in the league!

“I’ve been lucky to visit some great stadiums, but the San Paolo is the most vibrant place. It’s really made by the people; they’re so expressive in everything they do and that carries through to the atmosphere.”

Such passionate support isn't just confined to the stands. Wanting to preserve Napoli’s footballing dynasty, an Italian film producer by the name of Aurelio De Laurentiis refounded the club under the name Napoli Soccer for the 2004 season, before buying back the club’s history, once they had been promoted to Serie B in 2006, to restore the Societa Sportiva Calciao Napoli name. Their quest to get back to Serie A was fulfilled the following season.

After an impressive 2010/11 saw them finish third, after occupying second place for most of the campaign, Napoli have earned their first tilt in 21 years at Europe's top competition. The future looks bright for the club and its passionate support.

“Napoli fans are a bizarre contradiction �of supreme patience over the years and absolute impatience during a game,” grins Del Naja. “I’ve been in the stadium where they’ve made a funeral pyre out of scarves and set fire to the seats when we’ve lost – really extreme behaviour.”

Faced with the daunting task of sharing a group with Manchester City and Bayern Munich – as well as Champions League regulars Villarreal – Napoli face a difficult balancing act if their European adventure isn't to be over by December. Sampdoria, who finished fourth in 2009/10 and lost in the Champions League qualifying play-off against Werder Bremen, ended the campaign relegated.

While Del Naja is wary of competing on two fronts, he appreciates it would be a shame if their first top-level European appearance in a generation was taken lightly.

“I’m not sure our squad is big enough to compete in two competitions. Just look at what happened to Sampdoria last year; I’m not saying we’re going to go down, but you can see the effect it has on a side.

“A team needs to establish itself in their league, and in our case that’s the top five. It’s tricky, especially with Italy losing a Champions League place. I want us to maintain our position at the top of Serie A because that’s the most important thing right now.

“At the end of the day, we’ve played and worked hard to get to this position so we might as well play these games against the big boys and see what happens.”

Napoli start their Champions League campaign with a trip to Manchester City – another sky-blue outfit with passionate fans who stayed loyal even as their club dipped into the third tier, and who are determined to enjoy their first European Cup odyssey in decades (43 years, in City's case).

It's a daunting trip to face a stunning squad, but like a true Neapolitan, Del Naja want his team to go there with a positive outlook.

“If we play like we did in the first 20 minutes of the friendly against Barcelona, injecting our pace and counter-attacking effectively then we can unsettle them," he reasons. "I really hope we don’t go there to contain because their strikers are so fast and our defenders are quite slow. That's my big fear really.

“We might play a flat back four instead of the usual three at the back, and then have three in midfield. They tried it at the weekend – it all depends on Salvatore Aronica because he doesn’t like it when players run at him. It’s probably one area over the summer that we didn’t address properly.”

Up the other end, Napoli carry their own threat with their own massive attack – the three-pronged front-line of Marek Hamsik, Uruguayan goal-getter Edinson Cavani and erstwhile City target Ezequiel Lavezzi.

“They call them the 'Three Tenors' and they all do something so different and work together so well in that trident. They complement each other’s play and when they’re on form it’s beautiful to watch."

Del Naja hopes to see it in the flesh by taking advantage of Napoli's fourth competitive appearance in England, clearing his diary for a clash with another fervent musician who made it big in the 1990s.

“I’ve been working down in London and I’ve a few things to sort, but I’m going to do my best get up for the game. In 1994, Noel Gallagher sent me an old Napoli away shirt, which he came across in a gift shop on his way back from Capri. I think it’s safe to say I’ll be wearing it tomorrow. After all, it is red!"