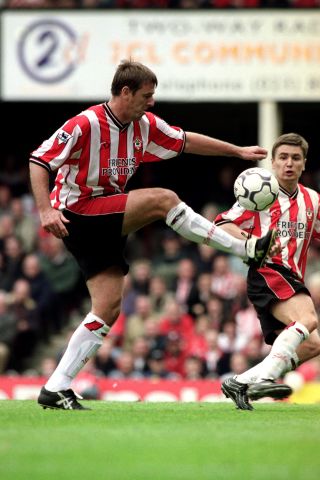 There’s a Soccer Saturday “King of the Ring” wrestling match between you, Phil Thompson, Gordon McQueen, Champagne Charlie and Paul Merson. In what order do people get lobbed out, and who’s the king?
Charlie George is first out, because he’s a midget. Next to go would be Thommo, because he’s only seven stones wringing wet. McQueen would bundle them out. I’d be next out the ring, leaving Merse and Gordon. McQueen would win it - he was a centre back and he’s nails. Charlie would look the best in the spandex though, he’s kept himself in good shape. My wrestling name would be Fat Matt.

Who could drink the most in the bar afterwards?
There’s no question about that is there - Merson would be top draw! Gordon McQueen can drink a bit too, but I can keep up with the best of them otherwise. I like champagne, but my favourite drink is Malibu and coke. I get a lot of stick about that.

If you’d played football in Spain, would you have changed your name to Matt El Tissier?
There’s every chance.

Does Phil Thompson wear a full Liverpool kit under his suit on Soccer Saturday?
He always wears a Liverpool thermal vest with matching socks and pants. I’ve never heard him get through a sentence without mentioning Liverpool. He’s the same off screen. No one beats him for bias, not Gordon McQueen, even me when I’m watching Southampton. But it’s funny.

Have you ever been in Chris Kamara’s house? He’s got a widescreen telly in every room, including the solarium.
I haven’t been to Kammy’s house but that wouldn’t surprise me at all, I’ll have to ask him. It’s a bit different chez El Tissier [sic]. I’ve just got the one widescreen, although there’s a plasma in the bathroom. I like to have a soak in the tub and watch the match, can’t beat it.

That’s quite a mental image.
I’m sure it is.

You were recently pictured enjoying a kebab. What sauce do you prefer – garlic or chilli?
This needs to be cleared up. It wasn’t a kebab! I’ve never had a kebab in my life. It was a cheese and mushroom burger, with tomato sauce.

So you’re a vegetarian then?
No. There was a beefburger in there, too.

Fair enough. Do you speak Dgèrnésiais?
What?

(Dubious pronounciation) …Dgèrnésiais, the language of Guernsey?
I’ve never heard of it. There’s an old Guernsey patois which my grandparents speak. It’s a mixture of French and English, but the younger ones don’t speak it at all.

Have you still got an Indian restaurant with Frankie Benali?
I never had one. I had a restaurant-nightclub around the corner from his – we served proper food. I still go in Francis’ Indian, though. I get free popadoms if I go in there with him. I have a chicken tikka masala – I’m a wimp when it comes to curry - and he has the Benali Biryani, which is actually on the menu.

Do you own any Panini stickers of yourself, or El Tiss memorabilia?
I don’t, although I’ve signed some pretty strange stuff. I signed some bloke’s forehead once. He couldn’t see it of course, so I just wrote whatever I wanted.

What song would get you onto the dancefloor? We imagine you’d be quite a graceful mover.
I’m rubbish when it comes to dancing, I lose all co-ordination once I’m off the pitch. But a bit of Chesney Hawks would get me up there – “I Am The One and Only”. I would just shout, punch the air and throw a few shapes.

Celebrity yodeller Ronnie Ronalde is a Guernsey superstar. Do you like to yodel?
I thought he was some kind of jazz musician… I’m not down with yodelling. I have never yodelled.

What would it take for you to kill a man?
I don’t think I could. They’d have to do something pretty bad – maybe steal my cheese and mushroom burger at 3am on a Sunday morning.  I’d see red. I’d get the chilli sauce from behind the counter and spray it into their eyes.

That would hurt - but would it kill them?
I’d kill them afterwards. They wouldn’t be able to see me, so I’d finish them off.

Which animal would you most like to be reincarnated as?
A pussy. They’re great. They do nothing, they laze around, you have the freedom of the world. It’d be brilliant.

You’ve recently had a plane named after you. What can we expect when we board - stewardesses in bikinis, Rod Wallace as co-pilot and free curry for all?
Absolutely. Sounds spot on.

Finally, what’s the meaning of life, El Tiss?
Have a right good time while you’re here.

From the April 2007 issue of FourFourTwo.