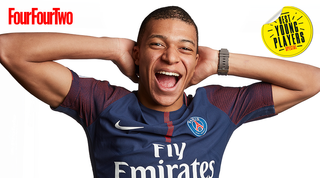 It will cost PSG €180 million to sign Mbappe permanently, making him the second-most expensive player on the planet behind Brazilian team-mate Neymar, who cost €222m.

And the young Parisian has paid tribute to the Samba superstar for giving him a warm welcome on his return to the capital, and making it straightforward for him to settle in.

Speaking exclusively in the April 2018 issue of FourFourTwo, out now, Mbappe says: “I really appreciate the relationship we have. He’s like a big brother to me. When the star player welcomes you as warmly as he welcomed me, it makes it easier for you to adapt to your new team.

“When you get to know Neymar, he is completely different from the image that he has on television.

“He loves laughing and making loads of jokes. He’s got a real joie de vivre and gets on with everybody.”

The €400m strike pair have had no trouble adapting to their new surroundings, hitting a combined 44 goals so far as PSG hunt a third domestic treble in four seasons.

Mbappe adds that, while Neymar hasn’t had to give him too many tips about sticking the ball in the net, the Brazilian icon has offered him plenty of pointers off the pitch.

“We are a bit different in terms of how we play, so he's not given me much advice from a footballing point of view,” explains the teenage talent.

“But he’s given me lots of advice about the game from a mental and psychological point of view. He’s told me about some of the mistakes he's made so that I can avoid making the same ones.

“It’s amazing to play with him. I don’t really have to describe it – everyone can see what it’s like.

“I hope everyone realises how lucky we are to have a player like him playing in our league. We all hope he will stay for a very long time and help us to win lots of trophies.”

Read the full cover interview with Kylian Mbappe in the April 2018 issue of FourFourTwo magazine. A best young players special, we also speak exclusively to Ryan Sessegnon, Richarlison, Gianluigi Donnarumma, Justin Kluivert, Trent Alexander-Arnold, Harry Winks and Timo Werner, and meet the people who shaped Marcus Rashford’s career. Plus, we go One-on-One with Rafael van der Vaart and experience the ‘Israel-Palestine Derby’ between Beitar Jerusalem and Bnei Sakhnin, after Donald Trump poured oil on the flames of an already-heated affair. Order a copy today, and then subscribe!