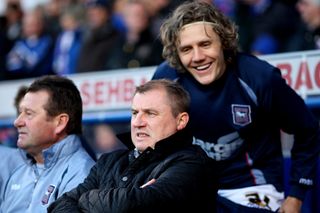 The Premier League's financial muscle means our top-flight fields have been graced by many of the world's finest players. It's easy to forget the technical aridity that previous generations grew up on: an atmosphere where "fancy" footballers from Hudson to Hoddle were mistrusted, marginalised, mocked.

That said, those who live on caviar occasionally crave chips. Even as the financial rewards took footballers into a different level of existence from those who watched from terrace or armchair, there's something alienating about technique so good that mere mortals couldn't conceive of it.

It's for this reason that at many clubs, the favourite player isn't the one whose onboard trigonometry can see the invisible pass: it's the one who charges around like a kid, enthusiastically piling into challenges to the approving roar of the crowd.

And it's especially the one who reacts with the crowd, seeing them not as a paying audience and potential merchandising opportunity but as equals. The rugged left-back you can imagine sharing a pint with. The club stalwart who cares as much as you do.

Rightly or wrongly, Jimmy Bullard feels like that everyman. The former painter and decorator who found himself paid to play a game he loves, Bullard at his best oozed enthusiasm and joie de vivre. In a game which far too often takes itself far too seriously, he was much-needed light relief, keeping Soccer AM in amusing clips for the thick end of a decade.

Examples are legion and well-known, but there's so many of them that you may not know them all. (If not, the embeds are at the bottom of this blog.) Interrupting team-mates' staid interviews with irreverent irrelevance. Leapfrogging unsuspecting opponents in a goalmouth melée. Charging around the dressing-room in a dirty-kit wheely-bin with underpants on his head. Choosing a free-kick taker by rock-paper-scissors (recently re-employed by Bayern Munich). Running the length of the pitch during a floodlight failure to score an imaginary goal. Being unable to keep a straight face when a bad smell interrupts an interview. Using a goal celebration to gently mock boss Phil Brown's notorious on-field team-talk. Pulling his shorts up to his nipples when filming the po-faced Premier League player profile.

Here's something in that irreverence, that determination to enjoy life and upstage the overly serious, which we find appealing. True, there's something of the hyperactive child about him, but there's a difference between childish and childlike, and we could all use some of that wide-eyed enthusiasm from time to time. It taps into something that's all too frequently absent from modern life.

Evidently Bullard was thankful for the opportunity he got. He'd swapped his paint-flecked overalls and got his chance at boyhood club West Ham, and when they released him he knuckled down and worked his way back up through Peterborough and Wigan. By August 2008 he was in Fabio Capello's England squad, and you don't get that for a smile and a cheeky wave. Bullard's set-piece precision and eye for a fine pass prompted club transfer records to be broken. No joke's that good.

It's true that Bullard's popularity may be the clipreel effect - a variant upon the modern phenomenon of the selective-highlights 'YouTube player'. Bullard has never represented my club, so I've never been disappointed by his lack of tracking back, or angrily agreed with club disciplinary measures for off-field indiscretions on pre-season tours or turning up late for training. I haven't been horrified to see him leave over a contract dispute.

Perhaps that's why he's my favourite Premier League player, for today at least. Many others have been better, but few have been more enjoyable to watch.

Rarely in this tribal game do you enjoy watching a member of the opposition; perhaps, if you're feeling especially gracious, you may applaud a moment of true greatness. Even less often do you identify with him. And perhaps that's what's missing in the modern game.