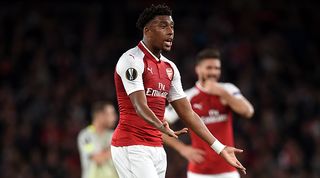 It might well just be a sign of how far down the pecking order Jack Wilshere is these days, but suffice to say that few expected to see Alex Iwobi holding fort with Mohamed Elneny in central midfield for Arsenal’s Europa League opener against Cologne.

With Francis Coquelin injured, plus Aaron Ramsey and Granit Xhaka rested, here was Iwobi’s chance to impress on his first start of the season – albeit in a wholly unfamiliar role that surely won’t be his calling in seasons to come. Still, with only 11 minutes of first-team football under his belt this season, you get the feeling he would have taken anything that came his way.

Arsene Wenger apparently has room for another winger-cum-central-midfielder in his squad with Alex Oxlade-Chamberlain gone – but realistically, probably not. Perhaps this was merely some rare experimentation from a manager who still seems unsure about the young Nigerian, and who believed his team could comfortably handle this season’s winless and goal-shy Cologne side with relatively thin armouring.

Their Bundesliga opposition had, after all, scored once in their first three matches of the campaign, and lost 3-0 to an average Augsburg side last time out. Against Hamburg they’d managed to ship three goals despite conceding only two efforts on target all game.

As is often the way with Arsenal, however, such an easy ride didn’t come to pass. Keyboards had hardly begun clattering with indignation about the swathes of Cologne fans in home quarters when the particularly pesky among the travelling contingent had outed themselves in celebration.

Not even nine minutes were on the clock (though still four minutes later than the first flare) when typo’s Jhon Cordoba mopped up David Ospina’s messy clearance and launched a fine opportunistic strike from 40 yards over his compatriot. You can't accuse Arsenal of not being charitable: Cordoba is a striker who doesn’t really score – his most prolific campaign yet was a six-goal haul for Envigado in Colombia’s 2012 Liga Aguila.

Iwobi was at no fault for that goal – nor in truth, for much at all in this jittery Arsenal display. Still, you get the feeling he’ll only be fielded centrally in relatively tame games like this – a tale of two halves for Wenger’s side; a hideous first in which Iwobi was largely bypassed and the home side’s creativity bordered on non-existent, followed by a second in which they switched shape, added a body in midfield and improved drastically.

Iwobi and Elneny found trying to pierce holes in Cologne’s packed defence more like jabbing a plastic straw through a brick, and neither looked capable of offering all that much until Wenger offered them some more help in the second half. Seven players managed more passes than Iwobi in this game - Elneny more than twice as many without really shining.

And so Wenger shuffled his deck by swapping the struggling Rob Holding for Sead Kolasinac, as Arsenal shifted from their three-man defence to what appeared more of a 4-4-2 diamond. Ainsley Maitland-Niles moved infield to join Iwobi and Mohamed Elneny, while Alexis Sanchez roamed free.

Thankfully for Wenger, his tweaks had the desired effect. Within four minutes of the restart, Kolasinac had leathered in Arsenal’s first goal in this competition since Kanu netted at Lens in April 2000.

As Arsenal improved and Cologne toiled, Iwobi continued to prod about his business unfussily. He was eventually replaced by Wilshere – on for his first Emirates Stadium appearance since May 2016 – in the 68th minute, just after Sanchez had curled in a fine effort beyond Timo Horn from outside the box.

Iwobi is, at least, back in Wenger’s thoughts. Last season was a major breakthrough, but it’s also hard to determine how far he stepped forward too: the Nigerian had started seven games in a row from mid-September to early-November, but was dropped for almost two months amid patchy form. He was back in mid-March with 10 Premier League starts on the bounce – and one in the 5-1 smacking at Bayern for good measure – but again, it wasn’t to last. From then on he featured in only four of Arsenal’s last 12 league games.

Wenger admitted in pre-season that his young star had endured “a little dip in his performances”, but cheerily declared before the season opener against Leicester that his player was in fine shape. “I am convinced he will have a great season,” said the Frenchman.

This was a start.