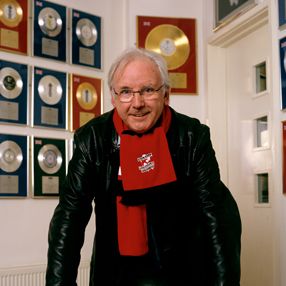 Ah yes, Saturday. Pete’s beloved Walsall had managed to snatch a draw from the jaws of victory thanks to what might kindly be termed an error of judgement at the back. And the generally genial Midlander is in an unforgiving mood.

“I’ve seen some bad goalkeepers in my life, but honestly,” he splutters, in a manner familiar to all who have sat open-mouthed in disbelief at another Saturday afternoon howler. “He walked out of the goal, he went outside the f**king box and the guy has just knocked it over him. It’s fundamental stuff.”

Your mind can’t help but go back to the defining moment of the last series of Pop Idol on ITV. As one half of the Cowell-Waterman double act, he routinely savaged young wannabes, albeit without reaching the vitriolic levels of his high-waistbanded sidekick.

Disgusted that heavyweight Scottish chanteuse Michelle McManus was to be crowned winner of the money-spinning talent contest, Waterman stalked off set apparently muttering dark words such as ‘travesty’ and ‘ridiculous’.

Safe to say, then, that Waterman is a man who wears his heart on his sleeve and is not in the habit of saying things just to keep people happy.

Born and raised in the Midlands he began life as a Coventry City fan, but experienced his ‘road to Damascus’ moment during a routine away match in the early-1960s. “I went with City to the old Fellows Park [Walsall’s home until their 1990 move to the Bescot Stadium], and just fell in love with it,” he says. “It was a real football ground and a smashing little club.

“When I began working with my current music partners, it turned out that one of them is a big Saddlers fan and I ended up going to watch them play Northwich Victoria in the FA Cup. I said to him, ‘Christ, you must be the only Walsall fan to travel up from London. If you ever want a bit of company give me a call.’ We’ve been going nearly every week for more than 10 years now.”

“There are times I wish I’d never said it, but most of the time… To be honest, I’d much rather support a team from the First or Second Division than a Premiership one.

“Let’s get real. Walsall are not a Premiership club – never have been and never should be. I don’t want to see my team getting beaten 7-0 by Man United and Arsenal every week.

“I look at our neighbours, clubs like Leicester, West Brom and Wolves – these guys are getting 27,000 in the ground every week and they still can’t really compete, so how can we expect to with 6,000 or whatever?

“I’d rather see us playing games, winning a few, losing a few, but still enjoying it. Not waking up every Saturday wondering how many you’re going to get beat by this week.”

The trouble is, getting beat is something that’s been happening rather a lot recently. In fact mid-March’s 1-0 win over First Division whipping boys Wimbledon was Walsall’s first victory since Boxing Day. Relegation is looming large. Not that the prospect of a return to Division Two appears to hold many fears for Pete.

"THEY DON'T KNOW WHAT PRAWNS ARE AT WALSALL"

“We are fundamentally a Second Division side anyway. We’ve had a good run in the First, but we have to be realistic. Anyway, I enjoy going to places like Lincoln and Brentford, or Shrewsbury on a wet Saturday afternoon with the River Severn about to flood the pitch. It’s what it’s all about for me. Even a club like Walsall is in danger of losing its connection with the local community.

“Look at our side now. We’ve got Vinny Samways – who is in a class of his ow�n compared to what we’re used to – and Paul Merson, who even at this late stage of his career is unbelievable.

“What they are passing on to the young lads is fantastic. But what we’re losing are the homegrown players. There’s still a few, like Gary Birch, but when I first started coming here about 75 percent of the side were local lads. I think we will miss that. Anybody who supports a smaller club – Crystal Palace, Stoke, whoever – you go because you love your club. You don’t go along to say, ‘I went’ and have a prawn sandwich. They don’t know what prawns are at Walsall.”

The music business has made Waterman a very wealthy man. In a career spanning more than 25 years in the industry he has produced and written more than 200 hit singles for the likes of Kylie Minogue, Steps and Rick Astley. He’s chairman of four successful companies – three in music plus a railway maintenance business – so why doesn’t he put his money where his mouth is and buy a stake in the Saddlers?

“I have a season ticket and I take the odd match sponsorship, but I wouldn’t invest in Walsall. In fact, I wouldn’t invest in football full stop,” he says. “Honestly, nobody loves football more than me, but I can’t see how a club the size of Coventry, for example, can get themselves £30m in debt.  I don’t want to sit in the stands at the Bescot and have the fans shouting at me: ‘Hey you big fat bastard, get your chequebook out.’ B*ll*cks to that...”

From the May 2004 issue ofFourFourTwo.