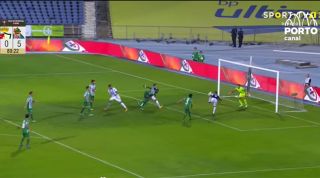 Porto comfortably dismantled their lower-league opponents 6-0 inside the Estadio do Restelo on Friday night, advancing to the fourth round of the Portuguese Cup.

The game was rounded off by an excellent scorpion kick from Porto's 26-year-old forward Hernani.

In the 89th minute, he latched onto a floated cross to the far post by lifting his leg back and flicking the ball over his head into the net.

Hernani seemed somewhat annoyed afterwards – perhaps as it was the last goal in a rout against tiny opposition – but we’re sure it was all for show.

Bayern Munich release their 2017 advent calendar... with Carlo Ancelotti still on it