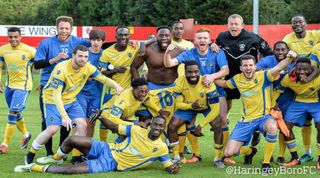 The BBC wanted to show Haringey's FA Cup fourth-round qualifying match against Heybridge Swifts at the weekend on the red button, but their proposal was rejected by the Isthmian League side.

So why did north Londoners turn down an offer that would have provided them with a significant financial boost? Well: work commitments and the club's weekly car boot sale, of course.

"Yes, the extra money would have been nice, but they gave us only a few days' notice and wanted the match to kick off at 12:30," Haringey manager Tom Loizou told the Isthmian's League's official website pre-match.

"Our players work, and lots of them work on Saturday mornings. Had we had more notice they could probably have managed to re-arrange their lives, but with only a few days to plan that can't be done. We're not going to go into the match fielding a weakened side and have players missing one of the biggest days in their career.

Bayern Munich release their 2017 advent calendar... with Carlo Ancelotti still on it

"The other issue was that we have a car boot sale at the club every Saturday morning.

"This is important to the local community - this isn't a wealthy area and many people rely on this to buy clothes and even food.

"Again, had we had time, we could perhaps have moved the boot sale around to accommodate the football – but you can't simply cancel an event that's important to the community to suit the TV people."

Haringey lost the FA Cup clash 4-2, but The People got their car boot sale. Good on 'em.