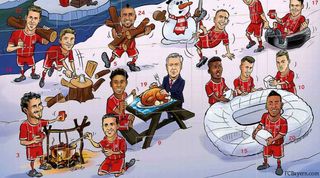 Ancelotti, who was sacked as Bayern Munich's head coach the day after their 3-0 Champions League defeat to Paris Saint-Germain last month, has left the manufacturers of the Bundesliga club's official advent calendars red-faced.

The 58-year-old Italian can be seen tucking into a turkey with David Alaba on a picnic table, very much front and centre of the cosy Christmas scene.

Bayern are rectifying the problem by releasing stickers to replace him with Jupp Heynckes, who began his fourth spell by masterminding a 5-0 victory over Freiburg on Saturday.