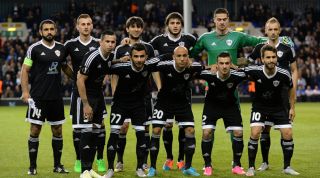 It’s impossible to talk about Qarabag without mentioning their unique and tragic history. They were established in Agdam, a town of rich history in the Nagorno-Karabakh region, and played in the Azerbaijan championship in the Soviet Union era. After the empire ceased to exist, they won the title in 1993, but at the same time terrible ethnic conflict erupted in the region.

Armenian forces captured Agdam, destroying most of it including the stadium, and allegedly committing war crimes. The local Azeri population had to flee to other parts of the country, leaving Agdam the largest ghost town in the world. It remains empty today.

The team retained the name while playing in Baku, and they still represent the Nagorno-Karabakh region, aspiring to return there after more than two decades. Recent success on the pitch is a source of huge pride, especially winning the championship title in 2014 and 2015, and achieving phenomenal results in European competitions. Players and fans alike feel like they fight for their homeland when facing top opposition in the Europa League. This is especially true for midfielder Gara Garayev, born in Nagorno-Karabakh in 1992. His family had to leave the city of Fuzuli when he was an infant.

Qarabag’s remarkable progress was achieved thanks to the coach Gurban Gurbanov, a former national team striker who amassed 67 caps for his country, and is hailed as a tactical genius in Azerbaijan.

He’s just 43, but has been in charge of Qarabag since 2008 and put the club firmly on the map. After defeating Rosenborg in 2009 and Wisla Krakow in 2010, they finally qualified for Europa League group stages by beating Twente on away goals.

Qarabag proceeded to make quite a few headlines, drawing with Saint-Etienne twice and beating Dnipro in Ukraine. On the last matchday, they faced Inter knowing that a win would take them to the last 32, and came agonisingly close to achieving the target. A perfectly legitimate goal in stoppage-time was mysteriously disallowed, leaving the score at 0-0 and helping Dnipro into second place at the expense of the Azeris. The Ukrainians eventually reached the final, and that made the injustice even harder to swallow for the Qarabag faithful.

This season, Gurbanov’s troops dreamed of qualifying for the Champions League, but lost to Celtic by a single goal. However, they thrashed Young Boys of Switzerland 4-0 on aggregate in the Europa League play-offs, proving that last season’s results were certainly no fluke.

Qarabag are a decent team by European standards, and they have gained invaluable experience. The draw was very tough for them, with Monaco and Anderlecht completing the group alongside Tottenham, but they must never be underestimated and could pose a significant threat to any opposition.

The political background gives Qarabag incredible mental strength. They fight for their cause, and feel like the whole region of Nagorno-Karabakh is behind them. The dressing room is remarkably united as a result, and even the foreign stars understand the special meaning of every game in Europe.

The Azerbaijan champions are very solid defensively, with 33-year-old captain Rashad Sadygov leading by example. With more than a century of caps for the national team to his name, he is vastly experienced, and is ably helped by the younger and quicker Badavi Guseynov in central defence. Qarabag conceded just five goals in six Europa League group stage games last season, and have only shipped five in four this time out – three of those against Spurs last time out. Even more remarkably, they conceded only once in six matches against Rudar Pljevlja of Macedonia, Celtic and Young Boys this summer.

Stats might suggest differently, but Qarabag actually try to play attacking football, even when facing top opposition. They had numerous chances to score at Inter last term, but failed to take any of them. A low conversion rate is the most significant weakness. Another problematic aspect of their game is a lack of speed, especially in central midfield. They can be found wanting on the counter, and Son Heung-min should take advantage of that again.

Gurbanov is a long-time admirer of Pep Guardiola, and he was lucky enough to visit Barcelona at the beginning of 2012 and study his idol. In fact, Qarabag are sometimes dubbed the 'Caucasian Barcelona'. Their style is attractive to watch – a patient short passing game with smart movement off the ball. When speed is needed, it’s provided by the wingers, Reynaldo and Afran Ismayilov. Holding midfielders tend to stay close to centre-backs in a 4-5-1 formation that can turn into 4-3-3.

Reynaldo, able to play on the wing and as a centre-forward, is definitely the most naturally gifted player in the team but is currently injured and so won't be around for this one. Nicknamed the “Azeri Ronaldo” by some fans, he joined Anderlecht at the age of 18, and played at Cercle Brugge and Westerlo on loan, but never fulfilled his potential in Belgium.

Instead, Qarabag will be looking to 26-year-old Brazilian midfielder Richard. No player has played more minutes for them this season, and his seven goals in 15 appearances makes him a danger from deeper positions.

Qarabag play their games in Europe at the Tofiq Bahramov National Stadium in Baku, named after the linesman who awarded the famous Geoff Hurst goal in the 1966 World Cup Final. Bahramov is by far the most famous person in Azerbaijan football history. He died in 1993, but his legacy lives on.

Many fans consider Sadygov, who has played for Qarabag since 2009, to be the living legend, but that is probably exaggerated. The honour should go to Allahverdi Bagirov, who worked as a coach at the club before the Nagorno-Karabakh war broke out. Bagirov created his own battalion and saved many lives, but was killed in 1992 when his car ran over an anti-tank mine near Agdam. He was posthumously named the National Hero of Azerbaijan. If the team ever returns to its town, the new stadium will most likely be named after him.