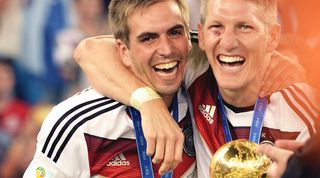 You've got six minutes on the clock to try and name as many of the 23 players we're looking for.

All eyes might be on the Bundesliga right now, but let's look back six years ago to the glory days of German football.

2014 was a golden year for Deutschland. For the first time as a unified country, Die Mannschaft pulled as one to reach the ultimate summit of world football. First they destroyed Brazil 7-1, and then they beat Lionel Messi's Argentina 1-0 in Rio.

The Germans partied long into the night - with Rihanna, according to the photos. It was the last great footballing moment from the country, so today, we'd like you to name all 23 players involved.

Many of the clubs these guys played for should be fresh in your mind after this weekend's action...