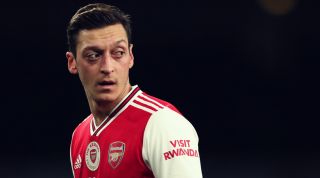 10 minutes are on the clock and there are 86 clubs to guess - from all over Europe, since we're counting not just domestic assists but European and cup competitions too.

Remember to tweet your scores @FourFourTwo, and remember to challenge your mates!

THEN TRY Quiz! Can you name the 44 teams Frank Lampard played against in the Premier League?

He's not exactly the first player you think of when you consider Jose Mourinho's most iconic line-ups - but Mesut Ozil made his name under the Portuguese manager at Real Madrid, balling with Cristiano Ronaldo and delivering a La Liga title midway through Pep Guardiola's dominance.

We're still trawling through Jose's phonebook to celebrate the fact that he's on our cover this issue - it's out now, everyone - so for today's quiz, it's the turn of trusted playmaker, Mesut Ozil.

Mesut and Mour have a complicated relationship. There's clear admiration - Jose once said "the ball smiles" when Ozil touches it - but they've had their tiffs.

In one argument, Mourinho told Ozil, "You think two beautiful passes are enough. You think you're so good that 50% is enough." Ouch.

Mesut Ozil's famous for assisting his teammates. He'd probably pass to Aubameyang when presented with an open goal. So all we'd like from you is to tell us every club he's ever assisted a goal against.

That's for Schalke, Werder Bremen, Real Madrid and of course, Arsenal. In all competitions.