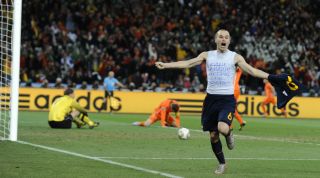 It involved the two defending finalists finishing bottom of their groups; the rank outsiders finishing as the only undefeated side; Kaka, Lionel Messi, Franck Ribery, Cristiano Ronaldo and Wayne Rooney disappointing; 11th-hour drama aplenty, and an eighth name being etched on the trophy.

There was elephantine controversy to deal with before the 19th World Cup even began. FIFA was accused of illicitly handing the hosting rights to South Africa, who then gave football’s governing body relentless frights over security, accommodation and transport.

The Adidas Jabulani was labelled “a supermarket ball” by Julio Cesar – a view endorsed by Gigi Buffon, Iker Casillas, Eduardo, Joe Hart, Hugo Lloris and virtually every other goalkeeper without a boot deal for the German sportswear behemoth (we’re sure Manuel Neuer and Maarten Stekelenburg defending it was purely coincidental, though). The vuvuzela caused widespread irritation and concerned hearing-loss experts. The slaughtering of an ox enraged animal rights activists.

Even before that, Thierry Henry had used his hand – twice – to set up the extra-time goal that snatched France a World Cup place at Republic of Ireland’s expense.  TIME magazine shamed it on a list of the all-time Top 10 Sporting Cheats along with deplorable acts involving Tonya Harding, Ben Johnson and Hansie Cronje, as well as Formula 1’s ‘Crashgate’ scandal.

But Les Bleus must have regretted ever getting to South Africa. Pandemonium ravaged their squad: a 0-0 draw with Uruguay, and upset losses to Mexico and South Africa ended one of the most dismal campaigns in World Cup history. Italy, who overcame France in the 2006 final, also fell at the first hurdle without winning a game, and though Paraguay and Slovakia were their group’s escapees, its greatest story belonged to New Zealand. Ricki Herbert selected players from Canterbury United, Plymouth Argyle, Tampa Bay Rowdies and even an unemployed pair, yet the All Whites exited South Africa 2010 as its only unbeaten team.

Pre-tournament favourites Spain lost the chance of that distinction in their first outing. Switzerland’s Gelson Fernandes scored the deliciously scrappy winner which condemned Vicente del Bosque's side to defeat – something the press blamed on the pitchside presence of Sara Carbonero, whom FHM had dubbed ‘The Sexiest Reporter in the World’ – distracting her boyfriend Iker Casillas. Fortunately for Spain, Xavi, Andres Iniesta and David Villa were magnificent in victories over Honduras and Chile, which sent them through.

Other group-stage highlights included Siphiwe Tshabalala’s rocket lifting the roof off Soccer City in the opening match; Christian Eriksen, at 18 years and four months, becoming the second-youngest European in World Cup history behind Norman Whiteside; and Landon Donovan’s injury-time goal against Algeria – merely 10 seconds after Tim Howard had the ball in his hands – snatching USA a ticket to the knockout phase at Slovenia’s expense.

The last 16 began drenched in debate. Fabio Capello was fist-pumping Frank Lampard making it 2-2 against Germany when the goal was disallowed – “it was so far in” said an incredulous Guy Mowbray during his BBC commentary – and England went on to lose 4-1. Carlos Tevez, meanwhile, nodded home a ridiculously offside goal to put Argentina en route to eliminating Mexico. Meaninglessly, the Three Lions and El Tri received public apologies from the loathed Sepp Blatter.

Meaningfully, those decisions expedited the introduction of VAR. Luis Suarez, Arjen Robben and Asamoah Gyan dazzled as Uruguay, Holland and Ghana got past South Korea, Slovakia and USA, while Brazil eased aside Chile and Paraguay outlasted Japan on penalties. Portugal, hitherto disappointing (a 7-0 demolition of North Korea aside), asked question after question of Spain, who nicked a 1-0 victory thanks to Villa’s goal which was indebted to divine build-up play.

Spain survived an even rougher ride to reach the World Cup semi-finals for the first time. Nelson Valdez had a goal disallowed for Paraguay, while Casillas saved an Oscar Cardozo penalty during four of the maddest minutes in World Cup history (three penalties were taken and not one of them counted as a goal). Villa ultimately won it for Spain; ‘San Iker’ won a kiss from Carles Puyol at the final whistle.

Another Johannesburg quarter-final produced even more drama. With 120 minutes all but up of Uruguay's clash with Ghana, Suarez slapped Dominic Adiyiah’s header off the line with his hand. The Celeste No.9 was red-carded, but Gyan – with the last kick of the game – fired his spot-kick against the crossbar and over. Sebastian Abreu’s patented Panenka-style penalty won the shootout for Uruguay, which Suarez celebrated wildly.

Elsewhere, Germany smashed Argentina 4-0 – sending Messi home without a goal – while Wesley Sneijder’s double helped Holland rally and beat Brazil. In the semis, Puyol headed Spain past Germany and the Dutch edged Uruguay 3-2 to guarantee that a European team would win the World Cup outside its own continent for the first time.

Before that, 20-year-old Thomas Muller netted to help himself to the Golden Boot, his county to a 3-2 win in the third-place play-off, and ensure Paul the Octopus finished the tournament having correctly predicted the outcome of all seven Germany matches (Paul over Pele any day when it comes to World Cup predictions).

Slugfest and a smooch

It was on to Soccer City, one of the tournament’s consensual pros, where the beloved Nelson Mandela – one week before his 92nd birthday – waved to thrilled spectators. Shakira and Freshlyground's Waka Waka set the scene for what many believed would be an exhilarating showdown between tiki-taka and totaalvoetbal.

The Dutch nevertheless treated the stadium like a UFC Octagon. Fourteen yellow cards were handed out – over double the previous high in a World Cup final – with referee Howard Webb judging that one of them was sufficient punishment for Nigel de Jong’s scandalous, studs-first kick into Xabi Alonso’s chest. It took the Yorkshire copper until the 109th minute to get out his red, albeit for a second yellow. With Johnny Heitinga gone, and penalties looming, Iniesta capped an imperious individual tournament with the only goal.

Moments later, Casillas kissed the trophy and lofted it into air. It was, nonetheless, not the kiss everyone obsessed over on that July 11.

“Look where we were after the first game, and look where we are now,” the pitchside reporter said during the Spain goalkeeper’s post-match interview. The skipper responded by giving his questioner a kiss. Puyol would have to wait for his second one.