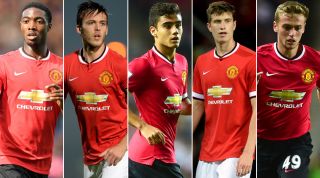 Manchester United’s 2013/14 season was one to forget in a hurry, but the release of The Class of '92 briefly allowed Reds fans to reflect fondly on a group of homegrown players whose feats may never be repeated again.

Danny Welbeck’s sale to Arsenal was criticised by those United hold dearest, with the likes of Gary Neville, Bryan Robson and Mike Phelan claiming United had "lost a sense of their identity" by letting a local lad fly the coop.

Yet what the naysayers were forgetting is that United retain a proud tradition of nurturing talent at Old Trafford – last weekend's win over West Ham was the 3,077th match in a row that a homegrown player has been included in the matchday squad.

United youngsters' hopes of making the first team seemed evermore difficult after a lavish summer of spending, but with new boss Louis van Gaal out of luck on the injury front, these youngsters have been thrusted into the limelight sooner than many anticipated. You might just see a few more of them this season – and here's what you need to know about them...

The most familiar face in this group thanks to the 443 minutes he's played so far this campaign, Manchester-born Blackett has already established himself as an integral part of Van Gaal’s plans, and his attributes may just suit a manager who sticks fervently to his philosophies.

Van Gaal likes ball-playing defenders and will ideally deploy one right-footed centre-back and another left-footed one. The Dutchman’s acquisition of Marcos Rojo was in part thanks to the Argentine’s left-footedness, and this attribute could also have a positive impact on Blackett's career.

A product of the successful local Manchester club Fletcher Moss, who boast the likes of Wes Brown as long-serving youngsters, the 20-year-old was thrown into the deep end with a start against Swansea on the opening day, and has been forced to adapt to the Premier League quickly.

After an unsuccessful loan spell at Birmingham last season, where he was substituted after 24 minutes of a clash with Sheffield Wednesday, the young defender has knuckled down and made use of United’s Carrington training complex to better himself through additional training – an attitude which will not go unnoticed under Van Gaal. His accomplished presence on the ball has been noticed too; a 97.9% pass-completion rate against QPR from 97 passes was the best of any United player in arguably their finest team performance yet.

Such stats will please a manager who appreciates natural ability on the ball, and with that left foot producing the goods, a regular spot in Van Gaal’s squad surely beckons one day – even if there is still work ahead. United's capitulation at Leicester, in which Blackett was red-carded, was a valuable lesson learned.

Wayne Rooney’s ill-discipline in the win at West Ham led some fans to question whether the fiery Merseysider has the temperament required to be a United captain. A paucity of leaders within Van Gaal’s squad quickly quashed any talk of Rooney being stripped of the armband, but in Tom Thorpe the Reds have a player accustomed to leading.

The 21-year-old’s footballing CV is certainly one to be proud of. He has captained United at U18 level – leading a team that included Paul Pogba to Youth Cup triumph in 2011 – before taking the armband in the inaugural U21s Premier League season of 2012/13.

Internationally, his headship accolades are even more impressive. Thorpe skippered England's kids to victory in the U17 European Championship as well as leading the U19s to the semi-finals in 2012.

Authoritative and a huge vocal presence on the pitch, Thorpe could be the ideal partner for Blackett, with whom he has risen through the ranks, and one day become the steadying influence on which currently looks like a disjointed United backline.

Thorpe’s problems lie in whether Van Gaal will bow to pressure and buy a tried-and-tested authoritarian figure that fans are craving in January. Now 21, Thorpe will have to impress sooner rather than later if he's to win a regular spot. As results become more fundamental to Van Gaal, he could find his chances limited.

A section of United fans have been slow to forgive Sir Alex Ferguson for allowing Pogba to leave the club so easily and become one of the most sought-after players in world football.

But the Reds currently have another talented attacking midfielder among their ranks nearing the end of his current deal; one who is capable of playing in the coveted trequartista role with the ability to score some showstopping goals to boot.

The comparisons between Adnan Januzaj and Pereira are too auspicious to ignore. Both love to run at defenders with pace, both are Belgium-born and both have scored some wondrous goals in their short careers so far. Pereira announced himself last season with a string of stupendous goals for the U21s, a spectacular 25-yard winner in the semi-final victory over rivals Liverpool last season catching the eye in particular.

Pereira has made the bench on several occasions so far this season, and the 18-year-old made his debut in the disastrous 4-0 defeat to MK Dons in the Capital One Cup. With a plethora of talent ahead of him in the Red Devils pecking order, though, patience will be required. Competition is particularly tough at that end of the pitch.

As debuts go, McNair's was pretty good. He didn’t seem fazed under the pressure of a late West Ham onslaught at Old Trafford after being catapulted into first-team action from nowhere, and now the Northern Irishman will be hoping to stay at the forefront of Van Gaal’s mind.

A timely headed interception when Carlton Cole seemed destined to score on Saturday showed how well his reading of the game has developed, and how his time as an attacker helped such a mindset.

McNair arrived at United in 2011 as a No.10 after being spotted by the same scouts who picked out Jonny Evans and Darron Gibson. Slowly but surely he has moved backwards, and can now play in central midfield, or alongside Thorpe at the back in United's U21 side.

Like his compatriot Evans, McNair is a no-nonsense defender whose best skill is simply breaking up danger and clearing his lines. Despite United being under the cosh for long periods, he made only 68 touches in the West Ham victory, mainly due to the fact he simply put the ball out of play or opted for the long ball to relieve his side of pressure. In tight encounters like that, having a player of McNair’s mentality is often useful.

Unlike Blackett, and even Thorpe to an extent, McNair is not as comfortable on the ball, and often he opts to go long. Unless Van Gaal can encourage that old attacking midfield creativity out of him, the youngster may have to look elsewhere for his opportunities.

The cream of the current crop. A key factor in Van Gaal’s willingness to let Javier Hernandez and Welbeck seek pastures new, Wilson’s goalscoring prowess has got United fans hot under the collar.

Eyebrows were raised when Ryan Giggs chose to hand the 18-year-old a first-team debut against Hull in the interim manager’s final home match in charge – a game the retiring club icon would have wanted to leave a lasting impression on. But the man Giggs described as a "natural goalscorer" repaid the faith, with his double helping United to a 3-1 win.

Like Welbeck, Wilson has pace to burn, but the England U19 international also possesses an unerring ability to hold off his man and blast his way through defences, even with his relatively slender 5ft 10in figure.

Wilson reminded fans of what he can do by smashing four past rivals Manchester City in a 4-1 Manchester Seniors Cup win in August. For one of those goals he picked the ball up on the halfway line and ran straight through the heart of City’s backline before netting – a sight to get any United fan yelping with glee.

In Wilson, United have the perfect blend of youthful exuberance and fearlessness who can provide cover for the illustrious stars currently battling for places in the current squad. With Robin van Persie not getting any younger, Radamel Falcao’s future past next summer uncertain and Rooney deployed in a deeper role, those disappointed by Welbeck’s departure will soon have another homegrown star to get excited about.