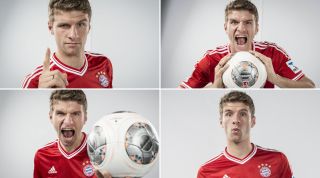 What has changed at Bayern since Guardiola arrived?

The club's structure is very strong and has been developed over the years, so not too much has changed in terms of organisation. Of course, Guardiola has very specific ideas about how football should be played. But generally speaking I don't think that Bayern are the sort of club that dramatically changes when a new coach comes in. The structures are very much established.

But hasn't the media interest taken on another dimension since the signing of Guardiola was announced?

I don't know if all that interest stems from our coach or simply comes from the fact that we have been so exceptionally successful in the past few years, especially last season. So I hesitate to make the connection that it's about the coach, it could be about the club as a whole. I have the impression that the club is extremely popular at the moment and that even people who aren't Bayern fans see the club in a positive light.

Why has there been this change of style, from lucky wins to exciting, attacking football?

The personality of the football player has changed. The key men, the players who lead on the pitch, are different types of people than in the past. It's less jousting for position, more working together. All players are likeable personalities.

That applies to German football in general, right?

Yes, German football has really grown in popularity, not least because we have so many good young players. That's why there's a more positive attitude towards the German game than may have been the case in the past, when it was all about running and fighting. And Bayern, as the top club in Germany and now Europe's number one team, is some kind of flagship for what you could call the German youth movement.

Has the rise of Borussia Dortmund helped Bayern become better?

Certainly. Competition is good for business, as they say. If you have strong competition, you've got to try harder. And that always helps you to develop and improve.

It's true that for a long time Bayern were alone at the top, but Dortmund have been very consistent. And I think both the club structure they have built and the squad they have assembled over the past few years make them a rival you have to take seriously in the foreseeable future. That's a good thing for us, as a club, because having a strong opponent means you have to be more attentive.

People used to say that German football lacked a second strong club, but now it's swung to the other extreme and people speak of a two-tiered society and are afraid that everybody focuses on just Bayern and Dortmund.

Talking of changes, what has changed under Guardiola for you personally is the role. Now you sometimes play up front.
More often than not I play in positions which I've played in before. Yes, it was only under Guardiola that I played up front, but that doesn't mean my style of play has changed. Of course, a different coach wants different things from you in certain positions, and that's also the case in the positions I can play. But there haven't been any elementary changes someone couldn't understand - everything was reasonable and has been productive.

When did you learn you were expected to play as a centre-forward?

There was no general-policy debate. I was aware that I was theoretically suitable for such a role, even though I guess it's not a position where it was clear from the beginning that I was going to play. I approached it totally unbiased. When the coach arrived at the club, he didn't tell me you play here, you play there. He had to get to know us, too. And when he's done that he'll put us where it's best for the team.

Apart from putting players in new positions, Guardiola has also changed the formation. It must take time to adjust to all these novelties. When did you practice these things?
Of course we elaborated on the coach's most important principles during the pre-season preparations, during the training camp. Things like attacking the opposition early and how players in various positions have to act when pressing or when we're building from the back. We practiced what we're expected to do.

We're asking because it's astonishing how well things are going, considering so many things have been changed...
It depends how you look at it. Of course you could say that when you bring in a new coach it takes time until things run smoothly and successfully. You're right, though: as far as the results are concerned, things are going brilliantly and there have been times when we've been playing extremely good football. But there have also been a few spells where we won the games, and won them deservedly, but weren't as commanding as we hope to be.

Can you work on the finer points during the season at all, considering your busy schedule?
You can do some theoretical work, with the video screen or tactics boards. That's possible during the season. But yes, it's hard to squeeze in long training sessions to really rehearse things.

After the Hoffenheim game, Guardiola said he might have to reconsider his concept. How would you describe this concept — is it mixing Bayern with Barcelona?
He has a vision of the game and he was certainly shaped during his time at Barcelona. It isn't about having possession just for the sake of it, that's not the concept. It's about using possession to position the team in the opposition's half in a way that makes us less liable to be hit on the break, making sure there are no big gaps between the players when possession is lost.

The focus on possession is nothing new at Bayern, though. Louis van Gaal started that...

Yes, that's true. You could say it's a similar school. Van Gaal used to coach Barcelona and the club's style goes back to the days of Johan Cruyff, so the outline might be similar, but every coach has his own individuality. Football will always be football. You can't overhaul it completely. And we don't have to, having just won the treble. It's always about details and adapting to different situations.

How would you describe Guardiola's coaching style? Does he talk to the players a lot?
It's true he often speaks with us players, but Jupp Heynckes and Van Gaal did that, too. He wants us to understand his ideas and back them, instead of just executing them.

Guardiola has also said he's surprised about how competitive the league is. Do you think the Bundesliga is still underestimated abroad?
It's hard for me to say how the Bundesliga is perceived in other countries. What I can say is that we don't just have two teams, as they have in Spain. We have a very broad 'midfield' in Germany in which everyone can beat everyone. The table doesn't always reflect how close the games are. All teams are physically strong, so they don't tire towards the end. Most of them are tactically astute. Our opponents always have a good gameplan to make life hard for us. So there are no walks in the park for us. Perhaps our coach was used to having some more easy games in Spain.

Do you sometimes have the feeling that it was only last season that the world woke up to how good the German game is?
It was a development that may have started with the national team. The star rose in 2010, when people suddenly said: well, the Germans can play a bit, too. That continued with many good, young players coming up, some of whom now play abroad. If you think back 10 years or so, there weren't many German players who were even targeted by foreign clubs (FFT suggests it was perhaps just Michael Ballack) Yes - that goes to show how the German game has risen in status. I can't say how people in England view our football, but I guess they know that when Bayern come to the British Isles, it will be difficult to beat them.

The new issue of FourFourTwo includes an 18-page Inside Bayern feature. Read all about it...