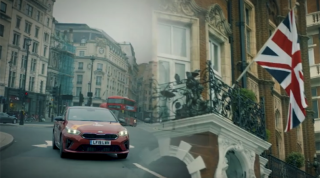 So here we are: down to the final two teams to see who’ll be crowned Europa League champions in 2018/19. One thing we do know is that it’ll be an English club, with Arsenal and Chelsea set to do battle in Baku after thrilling wins over Valencia and Eintracht Frankfurt respectively.

Throughout another terrific campaign of excitement and surprises, Kia have been empowering all fans to get closer to the action, no matter how old they are or which club they support.

Wide-eyed youngsters have benefited from taking the Hero’s Walk as official match ball carriers, leading out their teams on huge European nights – and even proving themselves to be excellent predictors, too.

Thousands of fans have caught a glimpse of the Europa League trophy, meanwhile – UEFA’s biggest – which Kia has been driving around Europe; to Seville, London, Frankfurt and many more.

We’ve seen fans surprised by some of their favourite teams’ greatest ever players – like Chelsea nuts Antonio and Hugo, for example, who spent a memorable day with Eidur Gudjohnsen after being surprised over coffee. Or Sporting CP fans João and Patricia, who won a dream day out at their club’s training ground and met the players they worship each week.

In Milan, meanwhile, Francesco and Maxim (below) were given the amazing opportunity to meet legendary striker Hernan Crespo – winner of the 1999 UEFA Cup – and join him at San Siro after winning the KIA Fan Challenge.

As football fans themselves, Kia know what it means to be a supporter; how we feel on matchday win or lose, and what certain special matches can mean over a lifetime.

It’s why they care about standing behind them via the Europa League, helping fans to cheer on their teams in whatever unique way they wish. Kia will continue to empower fans for the next two seasons, through 2019/20 and 2020/21.

Kia empowers all fans, players, and the UEFA Europa League