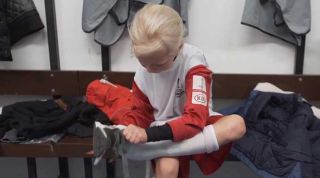 It’s one thing being in the stands to watch your team on a memorable European night under the lights – but it’s another entirely when you’re the person leading them out.

And it turns out that some of these youngsters who take Kia's Hero’s Walk are quite the lucky charms, too.

Take Emma, for example, an avid young Eintracht Frankfurt fan who got the lucky call to lead out her beloved Eagles against Shakhtar Donetsk in the Europa League last 32.

“I can carry the ball, hand it over and bring luck to Eintracht Frankfurt,” she smiled – before predicting all three of their goalscorers in the 4-1 win which sent the Bundesliga side soaring into the next round.

Frankfurt are now in the semi-finals to face Chelsea, after a remarkable run to the final four which has included victories over continental giants Inter Milan and Benfica.

Kia have helped other young fans live their dreams all season. Arsenal fan Jaiden took the Hero’s Walk against Vorskla Poltava, before seeing his team win 4-2 with two goals from his favourite player, Pierre-Emerick Aubameyang.

“Most of my friends said they were going to watch it on TV and that makes me more excited,” he grinned before taking the walk. “I feel like it’s going to be one of the best moments in my life.”

There could yet be more excitement for Jaiden: Arsenal are also into the semi-finals and could meet Frankfurt in the final if they can overcome Unai Emery’s former club Valencia.

It’s stories like these which demonstrate why Kia want to give children* the opportunity to shine for their clubs, making them Europa League heroes for the night just like the players they look up to.