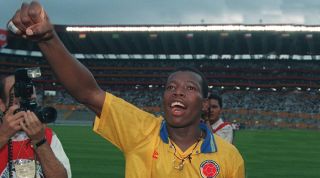 Diego Maradona raised his hand to set the scene. “Historically, us Argentines are up here,” he said, drawing a line in the air. “Colombia are down there,” he added, while tracing a second some six inches lower.

Argentina, after all, were two-time world champions and 14-time kings of South America. They’d made three of the last four World Cup finals. Colombia, on the other hand, were without a single major honour on the continent and had only attended two World Cups. At Italia '90 they, like Argentina in the group stage, had been humbled by Roger Milla’s Cameroon, Colombia exiting in the last 16.

Back-to-back Copa America winners in 1991 and 1993, Argentina had looked unstoppable going into South American qualification for USA ‘94 – two four-team groups, contested over a six-weeks period, in which the winners would qualify automatically and second place would face an inter-confederation play-off.

They hadn’t had everything their own way, though. Three weeks earlier than this fateful game, Argentina had arrived in Barranquilla on a 33-game unbeaten run, only to come unstuck. Colombia gave them a small taste of what was to come, sealing a 2-1 victory at the Estadio Metropolitano.

Still, come the return fixture on September 5, 1993 – the final matchday of qualification – Argentina sat just one point behind Colombia in Group A. They had never lost a World Cup qualifier at home. Argentina remained ‘up here’.

But Maradona & Co. had failed to appreciate Colombia’s trajectory under coach Francisco Maturana, who was back for a second spell in charge after leading them into Italia ’90. Inspired by the Dutch, his team pressed high, dominated possession and utilised their pace and creativity up front. “He brought out our individuality and imagination,” recalled midfielder Barrabas Gomez.

But Maturana brought out more than that – he dragged Colombian football out of its shell, forging an identity which remains to this day. “Before [I arrived in] 1987, we had never found our own way,” Maturana told The Blizzard. “We used a style of play to express what Colombia the country was all about: people who are known for being happy, people who are dreamers, people who are easily inspired.”

Never was there a more inspiring night for Colombian football.

Argentina threatened in the early stages through Gabriel Batistuta and Ramon Medina Bello, but Faustino Asprilla responded by offering a glimpse of what was to come, twisting and turning away from three defenders to force a stop from Sergio Goycochea.

Up in the stands, Maradona – having not played competitively for Argentina since Italia ‘90 due to a drug ban – sat wide-eyed, cupping his mouth. Five minutes before the break, it began.

The opening goal was scored by the rampaging Freddy Rincon, who went on to appear for Real Madrid, Napoli and on a list of Interpol’s most-wanted fugitives. But it arrived thanks to the genius of the team’s ideological leader, Carlos Valderrama.

Collecting a looping ball in a frantic midfield, the fuzzy-haired enforcer drifted infield in search of some calm. He found a simple, five-yard square pass to Rincon. But, having pulled so many Argentines out of position, El Pibe wanted to make better use of the space. He gestured that Rincon should get on his bike, before cutting back inside and delaying his pass for as long as possible. Then he slid in his team-mate, who’d built up a sufficient head of steam to burst past Ricardo Altamirano and round Goycochea to slot home the opener. Colombia deservedly led at the break.

As Argentina emerged for the second half, the locals vehemently urged them to "show some balls”, reminding them that defeat could see Paraguay progress to the World Cup at their expense. Colombia kept them waiting an extra couple of minutes, just to increase the nerves.

Argentina defender Oscar 'Big Head' Ruggeri returned with his sights on Valderrama’s ankles, while Colombia re-emerged braced to give a counterattacking masterclass. “We were a team that never gave the ball away to anyone," striker Adolfo Valencia told FIFA.com. "We knew that it was up to Argentina to dictate the pace, though, so we sat back and hit them on the break."

And how they hit them.

The sucker punch arrived five minutes into the second half as an inspired Asprilla collected a lofted pass, jinked inside the final defender and prodded home a second. Argentina had chances, but a young Oscar Cordoba in goal stood as tall as anyone that night. The 23-year-old likely wouldn’t even have been playing had Rene Higuita not been forced to watch the match on TV from a jail cell, after being accused of illegally arranging the release of a kidnap victim.

Another rampant counter ended with Rincon bouncing in a third on 74 minutes. Just one minute later, an unplayable Asprilla sent Colombia into dreamland by robbing Jorge Borelli and galloping forward to chip Goycochea for the goal of the night. A perfect five was complete five minutes before the end when Asprilla rolled in Valencia to poke home the coup de grâce.

With the game up and the hosts’ frustrations boiling over, Argentina midfielder Diego Simeone swung an elbow at Valencia just a few yards from referee Ernesto Filippi, who immediately marched purposefully towards Simeone. Surprisingly, he kept his hands out of his pockets.

GUIDE UEFA Nations League explained: how does it work?

Gomez, it’s claimed, pleaded with him not to dismiss Simeone as it would offer Argentina another excuse. “Fine,” Filippi is said to have responded. “Just put another goal past these sons of bitches.” Silva speculates he did it “on behalf of all South Americans who have for so long suffered the arrogance of Argentina”.

The godfathers of South American football had been humbled like never before, and would require an intercontinental play-off win over Australia to make USA '94. "I never want to think about that match again. It was a crime against nature, a day when I wanted to dig a hole in the ground and bury myself in it,” lamented coach Alfio Basile.

“Colombia's incredible style,” wrote Eduardo Galeano, was “a feast of legs, a joy for the eyes, an ever-changing dance that invented its own music.”

And they will never forget it.